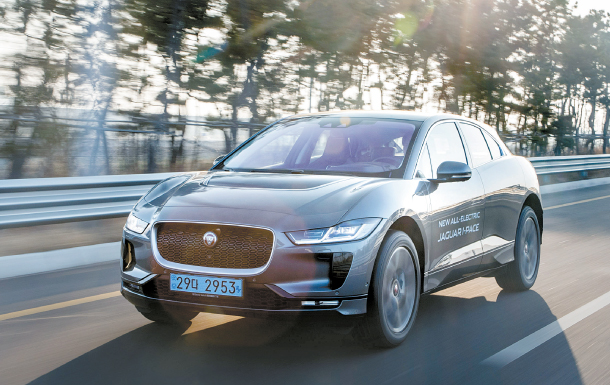 Jaguar’s I-Pace electric vehicle is put through its paces on a road in Incheon on Jan. 14. [JAGUAR LAND ROVER KOREA]

YEONGJONGDO, Incheon - Unlike the futuristic minimalist or over-the-top first attempts at an electric vehicle (EV) from most automakers, Jaguar’s I-Pace is a familiar car with an electric twist.

Viewed from the front, the crossover sport-utility vehicle (SUV) is unmistakably a modern Jaguar with distinctive headlights and grille reminiscent of those on the automaker’s F-Pace SUV.

Viewed from the side, however, the I-Pace has a less conventional shape. It comes in a cab-forward design with a long cabin and a short nose, taking advantage of the space freed up because it doesn’t have an internal combustion engine.

Despite the unfamiliar shape, the vehicle is still distinctly a jaguar, maintaining the brand’s signature rear haunches and performance.

“We had the luxury of recreating the silhouette of something you cannot do with an internal combustion car,” explained Jaguar Director of Design Ian Callum in December. “It gives you the freedom to create something of a different shape.”

The electric crossover gave a glimpse of a zero emissions future during a 45-kilometer (28-mile) drive across Yeongjongdo to Songdo, Incheon, on Jan. 14, zipping through the heavy smog that day.

The crossover hummed through the port city at manic speeds, sporting the traditional Jaguar performance and confidence despite it being the automaker’s first outing with the latest technology.

The I-Pace’s single-speed electric powertrain boasts up to 400 horsepower and up to 71.0 kilogram-meter (513.5 pound-feet) of torque.

The massive amount of torque, thanks to its electric propulsion system, got the car moving without skipping a beat and the vehicle reached speeds of up to 150 kilometers per hour (93.2 miles per hour) in an instant, seemingly keeping up to the automaker’s promise of 0 to 100 kilometers per hour in 4.8 seconds.

Along with its powerful performance, the I-Pace comes without engine noise and the crossover drove silently, barring wind noise when reaching speeds higher than 100 kilometers per hour.

Although the I-Pace recreates driving excitement through an electric powertrain, it isn’t exactly an industry leader in terms of battery technology.

The EV’s battery range comes in at 333 kilometers on a single charge from a 90 kilowatt-hour battery, and the figures on the dashboard throughout the test drive suggest this is pretty accurate. The vehicle’s estimation was just a few kilometers longer than the actual 45-kilometer distance traveled.

Jaguar’s EV does not yet meet the battery efficiency of other existing vehicles despite beating traditional premium brand automakers like Audi to the market.

Given it’s one of the two premium electric SUVs on the market, the I-Pace can’t escape a direct comparison with the Tesla Model X.

The highest trim Model X packs a slight advantage in battery size with a 100 kilowatt-hour battery compared to the I-Pace. However, the larger American vehicle promises a significantly greater range of 565 kilometers.

Meanwhile, Hyundai Motor’s electric sub-compact SUV - the Kona EV - which costs less than half of the I-Pace, has a range of 406 kilometer on a single charge with an even smaller 64 kilowatt-hour battery.

Despite being second-class in battery technology, Jaguar didn’t compromise on the details when it came to the interior and exterior.

Inside the car, the uninterrupted fixed panorama sunroof stands out straight away, providing a roomier perception of space. Though the sunroof can’t be opened, it stretches from the front row to the second.

The soft-touch interior is also packed with compartments with apt space to place your phone next to the push-button shift selector.

In the back row, Jaguar included space for a tablet or book underneath the seats. While the space is a nice addition, it isn’t big enough for larger devices, like a laptop.

As for larger storage, the I-Pace has a spacious 656-liter (23.1 cubic-feet) trunk with its charging cables hidden in an underneath compartment. The I-Pace also includes a tiny 27-liter storage space under the hood that can fit a small bag of groceries.

The crossover’s charging port is also conveniently located at the left-front side of the vehicle, compared to other EVs that place it toward the back.