Olympic director returns with ‘The Days’: Hit musical is back for another run as Chang recovers after Games

Olympic director returns with ‘The Days’: Hit musical is back for another run as Chang recovers after Games 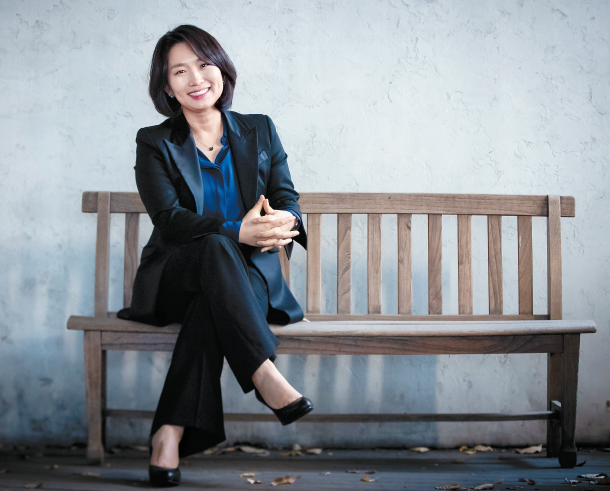 Director Chang You-jeong sits down to discuss her career and the Olympics with the JoongAng Ilbo. [KWON HYUK-JAE]

The 2018 PyeongChang Winter Olympics may have been a huge multi-national festival of sports that entertained millions of spectators, but for the people behind the scenes it was also a lot of hard work. Film director Chang You-jeong, who directed the Games’ closing ceremony, remembers just how exhausting it was.

Chang is one of Korea’s leading playwrights and musical directors. She made her debut after majoring in directing at Korea National University of Arts in 2002 and has directed a string of hits including “While You Were Sleeping” (2005), “Finding Mr. Destiny” (2006) and “Brothers Were Brave” (2008).

Chang is particularly well-known for her jukebox musical “The Days” (2013), which features hit songs by folk singer Kim Kwang-seok. The musical has been viewed by more than 410,000 people and is still going strong today.

The 2018-19 season of “The Days” began its tour last month in Busan. It will make a stop in Daejeon before arriving at the Blue Square in Hannam-dong, central Seoul, on Jan. 22.

Before preparing for the latest rendition of “The Day,” Chang took some time off after the Olympics to rest and spend some time on herself. On a quest to tick some items off her bucket list, Chang visited Argentina, learned the Tango, tried rock climbing, lived in London for a month and watched “Hamilton” on Broadway. According to Chang, going through that process allowed her to “get rid of all the hard work and regain health.”

Chang sat down with the JoongAng Ilbo to discuss her thoughts on the new season of “The Days” and her experience at the Olympics. The following are edited excerpts.

Q. Was this the first time that you have been able to recharge since your debut as a director?

A. Yes - I remember only sleeping five hours a night for two and a half years before the Olympics’ closing ceremony. Even though I had two children in December 2015, I had to return to work 10 days later. When the Olympics were over, I was in pretty bad health - my eyesight’s rapid decline from 1.0 to 0.5 was evidence of that. So last year, I decided to take leave from work and focus on my living situation, and how I could achieve satisfaction and happiness.

You made some changes to the new season of “The Days.” What was your motivation for that?

I’ve often heard “the second act was more interesting.” When I enquired about the first act, the answer was “the first act is also not bad.” But in the world of professionalism, “not bad” is synonymous for “not good.” Boredom is also progressive, so if you are bored from the start, that boredom will just increase toward the end. I was always concerned with how I could make the first act better.

This time, I will reinforce the drama instead of cutting out songs. There will be minor changes that follow our era’s mindset. One of them is the correction of a line of the main character’s daughter. It was fixed from “I am becoming a female student” to “I am becoming a student.” That line was supposed to exploit Jeonghak’s conservative character, but the words themselves could make the audience uncomfortable.

Was it hard to prepare for the Olympics?

The budget was way too low, and there were too many things that needed to be verified and approved. It took about a year to decide who would be singing the national anthem. I couldn’t relax for a single day. But I learned a lot due to that. I came to realize that there is nothing that cannot be done if you take one step at a time and that I can find myself while listening to other people’s stories.

I also learned that you should always do your best, no matter how rough the conditions are.

It’s interesting that you chose Kim Kwang-seok’s songs to combine with the story in “The Days.” How did you come up with that idea?

I was keen on a unique and new story. I thought a storyline of an “activist’s love story” wouldn’t be something that anyone could easily come up with. The harmony of fantasy and a story that elicits sympathy are important. Not just the good feeling you get from Kim Kwang-seok’s songs, but sympathy for the dark side of Korean society and your fantasy about a world you don’t know very well like the Blue House’s security service. That is the charm of “The Days.”

It is unusual for actors like Yoo Jun-san, Oh Jong-hyuk, Seo Hyun-chul, Lee Jeong-yeol, Kim San-ho and Park Jung-pyo to still be performing in a musical like “The Days” when it’s been running so long. How did that end up happening?

Not only are they good fits for the roles, but they’re also both great actors. Yoo especially draws in even the other actors with his positive energy. He puts in so much effort, even taking singing lessons between performances for season four. He hits the last number’s high note perfectly. After every performance, he asks, ‘How was it?’ and takes notes to reflect on them for the next performance. I really admire him.

I think I will be working on new ideas for a while. I don’t have great ambition. I live my life thinking that I do things for fun instead of challenging myself. Whether it is film, drama or a performance, I want to make a piece that warms my heart.