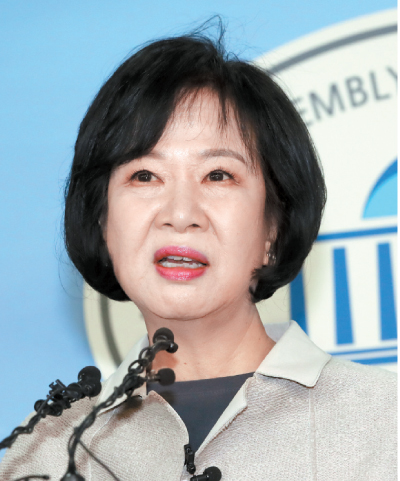 A ruling party lawmaker under fire for allegedly using information gained in office for personal gain announced her exit from the Democratic Party (DP) Sunday after requesting an official investigation into the accusations leveled against her.

“I can no longer remain as a burden to the party since the issue relates to my personal life,” said Rep. Sohn Hye-won at a press conference at the National Assembly on Sunday, sitting beside DP floor leader Rep. Hong Young-pyo. “I will lay down my party registry, which I regard a part of my body.”

Sohn said her decision to leave had been opposed by the party’s leadership, which last Thursday ruled against punishing her and a lawmaker accused of influence peddling. But she quit because she did not want to not “drag the people into a meaningless argument” over the allegations, which she has categorically denied.

Along with calling for a probe by prosecutors into the matter, Sohn added that she would report SBS to the police for “spreading false information, tarnishing my reputation and any other reason I can use.”

Last Tuesday, the broadcaster was the first to report allegations related to Sohn’s purchase of nine buildings in Mokpo, South Jeolla. In the report, it was noted that the value of some of the buildings had jumped fourfold since she purchased them between March 2017 and September 2018.

The report alleged that Sohn had conducted the transactions based on insider information obtained while on the legislature’s culture, sports and tourism committee. The information was related to the Cultural Heritage Administration’s designation of a 114,000-square-meter area as a “modern history and culture site.”

The lawmaker has claimed that the purchases - transactions conducted in the names of family members and her aide - were meant to “create an exemplary precedent of urban revitalization” in an area with a rich history and culture.

In the week since the initial report, Sohn has engaged in fierce public battles with her accusers. The opposition parties have seized on the allegations, and those against DP lawmaker Seo Young-kyo, to bombard the ruling party.

Despite objections from the Blue House that the accusations have been taken too far, the main opposition Liberty Korea Party (LKP) is now referring to the “Kim Hye-kyo scandal” - using one character from the names of first lady Kim Jung-sook, Sohn and Seo. Without citing evidence, LKP floor leader Na Kyung-won claimed Thursday that Sohn had used her personal friendship with the first lady to enrich herself. The two had attended high school together.

Sohn’s decision to remove herself from the party may be intended to lessen the political burden on the DP and President Moon Jae-in, the man who brought her into politics from her previous job as a brand designer.

Prior to her political life, Sohn was well known for having created designs for a host of well-known names, including both of the country’s top two soju labels.

After spending nearly a decade languishing with low support numbers, the DP under Moon’s leadership tapped Sohn ahead of the 2016 legislative elections to lead a massive rebranding campaign and overhaul the party’s image.

In her announcement Sunday, Sohn said she took pride in helping create the party’s current Korean name, which loosely translates as the “Together Democratic Party,” and its current logo, which are credited as factors in party’s razor-thin victory in the 2016 nationwide races. She also designed the public face of Moon’s successful 2017 presidential campaign.

Sohn responded to the opposition’s calls for her to quit her job as a lawmaker by saying she would do so if the prosecution finds her guilty, and that she would not run for reelection in the upcoming 2020 legislative elections.