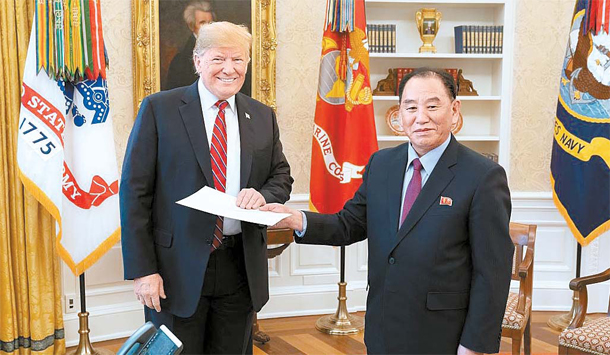 U.S. President Donald Trump, left, receives a letter from North Korean leader Kim Jong-un, delivered by his close aide Kim Yong-chol, at the Oval Office in Washington Friday, in a photo released on Twitter by the White House Sunday. The White House late announced that a second North-U.S. summit will be held next month. [YONHAP]

U.S. President Donald Trump said on Saturday that he has agreed to meet North Korean leader Kim Jong-un for a second summit in late February at an undisclosed location after having an “incredible meeting” with a top Pyongyang official at the White House on Friday.

The venue for the upcoming summit has not yet been disclosed. “We’ve picked a country, but we’ll be announcing it in the future. Kim Jong-un is looking very forward to it and so am I,” Trump told reporters Saturday at the White House.

Trump also lavished praise on ongoing talks between his administration and North Korea, saying there has been “a lot of progress as far as denuclearization is concerned.”

“Things are going very well with North Korea,” he added.

Washington however maintained that sanctions on North Korea would remain in place.

Kim Yong-chol’s visit was much anticipated to speed along planning for another North-U.S. summit.

Vietnam and Thailand have been reported as possible locations for the second North Korea-U.S. summit. They are both Southeast Asian countries with North Korean embassies that are located within the flying range of the North Korean leader’s Soviet-era private jet, the Chammae-1.

Kim, who doubles as director of the North’s United Front Department responsible for inter-Korean relations, arrived in Washington Thursday evening on a flight from Beijing.

He was accompanied by a delegation of around 10 people including Kim Song-hye, a senior official of the United Front Department, and Choe Kang-il, a deputy director general for North American affairs at the North’s Foreign Ministry.

Robert Palladino, spokesman of the U.S. State Department, said later in a statement that Pompeo and Biegun “had a good discussion” with Kim Yong-chol “on efforts to make progress on the commitments President Trump and Chairman Kim Jong-un made at their summit in Singapore.”

Kim Jong-un committed to the complete denuclearization of the Korean Peninsula and Trump pledged to provide security guarantees for the North in the June 12 joint statement.

Afterward, Kim Yong-chol visited the Oval Office and delivered a letter from the North Korean leader to Trump. While its contents are unknown, the letter is believed to be a response to a letter Trump sent to Kim Jong-un last weekend, laying the groundwork for the second summit.

Pompeo later held a luncheon with the North Korean delegation.

Sanders said ahead of Kim Yong-chol’s meeting with Trump that the two “will discuss relations between the two countries and continued progress on North Korea’s final, fully verified denuclearization.”

Kim Yong-chol had initially been scheduled to hold high-level talks with Pompeo in New York in early November, but that visit was canceled at the last minute. During his last visit to the White House on June 1, Kim Yong-chol delivered a letter from Kim Jong-un to Trump, which helped put back on track the historic first North-U.S. summit on June 12 in Singapore.

Further details, logistics and an agenda for a second summit could be discussed in North-U.S. working-level talks in Sweden. The U.S. State Department announced that Biegun will make a four-day trip from Saturday to participate in an international conference hosted by the Swedish Foreign Ministry.

The talks are also attended by Choe Son-hui, North Korea’s vice foreign minister, who arrived in Stockholm last Thursday, making this the first time the working-level negotiators from the two countries have met face-to-face.

The purpose of the so-called Track 1.5 international conference hosted by the Swedish Foreign Ministry is believed to be roundtable talks on North Korea’s denuclearization. While working-level talks between the two countries have been deadlocked for months, the announcement of the second summit for February could compel the two sides to reach some sort of deal during the four-day talks.

Adding to this speculation is the fact that the envoys are undertaking the negotiations at a facility equipped with lodging, completely shut off from access by outsiders. Analysts have compared the meeting to a papal conclave, where participants are locked in seclusion until they have reached a decision.

South Korea’s top nuclear envoy Lee Do-hoon, the special representative for Korean Peninsula peace and security affairs, also departed from Seoul for Sweden Friday. A trilateral negotiation could be held with Seoul acting as a mediator.

Washington has thus far maintained that the current international sanctions regime on North Korea will be maintained until Pyongyang implements steps towards “complete denuclearization,” like submitting a list of its nuclear weapons and facilities. North Korea is believed to want concessions like an end-of-war declaration and easing of sanctions before taking actual steps toward scrapping its nuclear arsenal.

A compromise, like partial sanctions relief in exchange for the dismantling of the North’s intercontinental ballistic missiles, could also be a possibility to break the current deadlock.