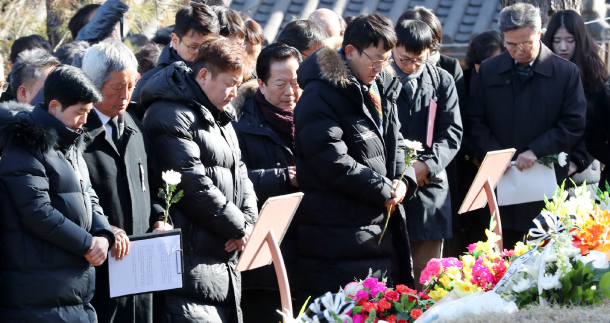 Citizens and family members of the victims of the Yongsan tragedy pay silent tribute at the graves of victims Sunday, at Moran Park in Namyangju, Gyeonggi. That day marked the 10th anniversary of the Yongsan tragedy, a clash between police and tenants that resulted in the death of five protesters and one police officer. [NEWS1]

On the 10th anniversary of the Yongsan Disaster, Min Gab-ryong, commissioner general of the National Police Agency, suggested that an apology for force being used excessively on Jan. 20, 2009 would be forthcoming.

“The police are planning to make a well-deserved, official apology as soon as possible to the bereaved of the Yongsan Tragedy,” he said at a press conference held Jan. 14.

The event itself started as a clash between police officers and soon-to-be-evicted tenants of the Namildang building, a five-story structure in Yongsan District, central Seoul. As a push for redevelopment threatened their homes, the residents occupied the rooftop of the building and refused to move.

A SWAT team was dispatched as the protesters showed no signs of backing down, and military-style suppression tactics were employed. Negotiations were not attempted.

Five residents and one police officer died in the clash.

A February 2018 internal fact-finding committee assembled by the National Police Agency conducted an investigation of the incident. Many failures and irregularities were found. The manuals for civil disturbances were not followed properly, and the police did not take into account the presence of flammable materials at the site.

When the residents started throwing Molotov cocktails, the building went up in flames.

The location remained empty for more than seven years. But in April 2016, the Seoul government passed the Yongsan Fourth District Improvement Plan. It included the construction of a new building on the site of the tragedy.

“I sell hotteok (honey and nut filled pancakes) here, in front of the place where my husband died, and my heart aches every time I see a new story being added - but I suppress my pain, just thinking about how much more painful my husband would have been, suffering in the flames all alone,” said 64-year-old Kim Yeong-duk, wife of Yang Hee-sung, a protester who died during the incident.

Kim and her husband ran a restaurant before the tragedy, but now she runs a small snack stall, selling the hotteok pancakes in front of what was once the Namildang building. She said that she earns about 30,000 won ($26) a day.

“I remain stuck in Jan. 20, 2009,” said Jeon Jae-sook, wife of Lee Sang-rim, who was also one of the victims of the tragedy. “I never visited the place, not even once, after the incident. It reminds me of the pain.”

She and her husband ran a pub before her husband died. She now runs a small lunch-box shop.

Witnesses to the 2009 tragedy have expressed their concerns and condolences. Some present have written a book dedicated to the victims. The title roughly translates: “This Stop is Yongsan, Station of Tragedy.” They note in their book that nothing much had changed over the past decade.

“The mixed-use building that is being built right now can’t exceed Namildang’s traditions and the passions of the people working there,” said Gong Seon-ok, one of the writers of the book.

The police are re-examining the “standards of police reinforcement” and are planning to make appropriate improvements. Sources say, however, that much has been improved since the Yongsan tragedy.

“There have been lots of improvements,” said one police source from Seoul who requested anonymity. “In the past, the police usually arrested the protesters without even attempting for a negotiation. This was because the police leadership pressed us to arrest everyone on the spot and reprimanded us if we couldn’t capture everyone. Now, that kind of culture has changed. It’s getting better.”

But some within the force said that violent demonstrations need to stop.

“The excessive use of force by the police needs to change, but the violent demonstrations - with the throwing of Molotov cocktails - need to stop as well,” a police source said.