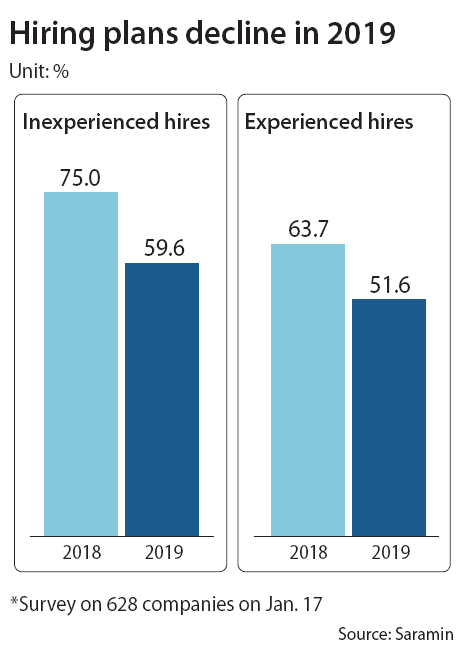 The job market will likely be weak this year amid a slowing economy and the minimum-wage rise despite government efforts to boost employment, according to a recent survey by job portal Saramin.

In the survey conducted on Jan. 17, the job search firm contacted 628 companies. It found that fewer are looking to recruit new employees this year compared to last year.

About four out of 10 said they do not have recruitment plans for inexperienced recruits this year.

For inexperienced recruits, 23.2 percent of the companies responded that they do not yet have recruitment plans for this year, while 17.2 percent said they have no plans at all.

This is the first time since the survey started in 2015 that fewer than 60 percent of companies responded that they are planning to hire new employees.

Among the reasons given for foregoing the hiring of new, inexperienced workers, 38 percent said that current staffing was sufficient, while 25 percent cited labor cost pressures, 22.2 percent industry difficulties and 21.3 percent the preference for hiring experienced workers. They also mentioned restructuring (6.5 percent) and the reduction of business size (5.6 percent).

“Along with the extended stagnation of the economy, the forecast for this year looks gloomy,” said an employee at a medium-sized company. “Large companies may have room to conduct new hiring, but for the majority of medium- or small-sized companies, there is too much pressure from the minimum-wage increase.”

The source added that companies were looking to cut costs by reducing recruitment.

“The government is emphasizing jobs, but it’s difficult for companies,” the employee said.

The problem extends beyond private companies to state-funded corporations and organizations.

Korea Gas Corporation, which hired 393 employees last year, said it is planning to recruit only 196 new employees this year.

The National Health Insurance Service had 1,274 new hires last year, but it is only planning for 844 this year.Korea Veterans Health Service, Kepco KPS and Korea Railroad are also planning reductions in recruitment.

Seven out of 10 companies said they would recruit inexperienced hires as and when needed rather than conducting seasonal recruitment rounds. Only 9.6 percent of companies responded that they would only hire inexperienced applicants through the regular process.

The average salary of a inexperienced recruit was at 25.36 million won ($22,420) this year, while 27 percent of the positions offered were sales related.

The job market for experienced workers is also seen as being weak this year, with only 51.6 percent of companies planning to recruit in the category, a 12.1 percentage point decline from last year. Companies most prefer workers with an average of 4.6 years of experience.

Most companies have a bleak outlook on the economy for this year.

“The job market looks to slow this year compared to the previous year,” said a Saramin executive. “The majority of companies predict that the outlook isn’t good for this year due to the recession and a rise in labor costs.”