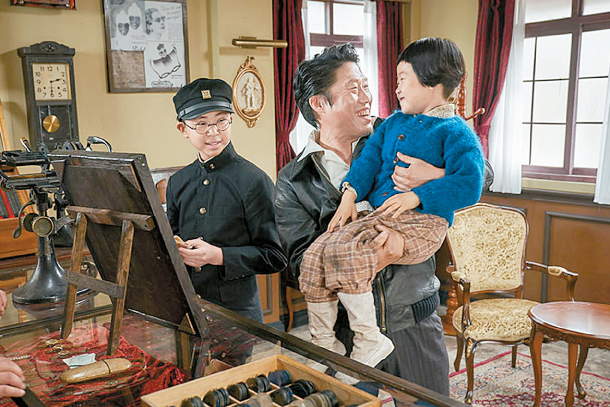 Local titles “Mal_Mo_E: The Secret Mission” and “Inside Me” held on to the top two spots at the weekend box office, which did not see much change from the week prior. New releases that made it into the weekend’s top five include Hollywood mystery drama “Glass” and a rare, local animated film, “Underdog.”

“Mal_Mo_E,” which tells the story of a group of people who try to publish a hangul (Korean alphabet) dictionary against pressure from the Japanese military during Japan’s colonial rule over Korea (1910-45), sold 620,000 tickets at 1,137 screens from Friday to Sunday. The film made up 31.8 percent of the weekend’s entire ticket sales revenue and its total ticket sales now stands at 2.2 million, according to data provided by the Korean Film Council on Monday.

Body-swap comedy title “Inside Me,” about a high school student who switches places with a middle-aged gang member after landing on top of him, sold 480,000 admissions at 992 screens over the three days.

The title starring Jinyoung, Park Sung-woong and Ra Mi-ran has sold a total of 1.6 million tickets since it arrived in theaters on Jan. 9.

Despite negative reviews, the Hollywood title “Glass” coming from M. Night Shyamalan of “The Sixth Sense” (1999) debuted at third, pushing down popular animated title “Ralph Breaks the Internet.” “Glass” is the final installment of the “Eastrail 177” trilogy, which began with “Unbreakable” (2000) and continued with “Split” (2017). The film sold 267,000 admissions in its first weekend.

Bringing back James McAvoy, Bruce Willis and Samuel L. Jackson to the screen, “Glass” tells the story of David Dunn (Willis), the Philadelphia security guard from “Unbreakable” who realizes that he is invincible, Elijah Price (Jackson), whose bones break like glass, and Kevin Wendell Crumb (McAvoy), a disturbed man with 24 personalities. In the final part of the trilogy, Dunn uses his abilities to track down and capture The Beast, the most dangerous of Crumb’s 24 personalities. Orchestrating the fight is Price, who holds a secret that the two men are desperate to learn.

The “Wreck-It Ralph” sequel landed at fourth in its third weekend with 142,000 tickets sold and was followed by the local animated flick “Underdog,” which rounded out the top five. 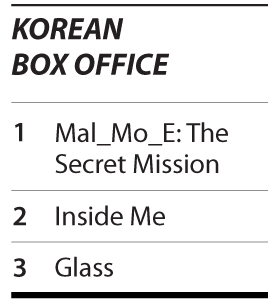 Co-directed by “Leafie, A Hen into the Wild” (2011) director Oh Sung-yoon and director Lee Choon-baek, the movie sold 70,000 tickets from Friday to Sunday. The movie revolves around a group of stray dogs on their journey to finding freedom. Do Kyung-soo from boy group Exo and Park So-dam from “The Priests” (2015) lend their voices to characters in the film.