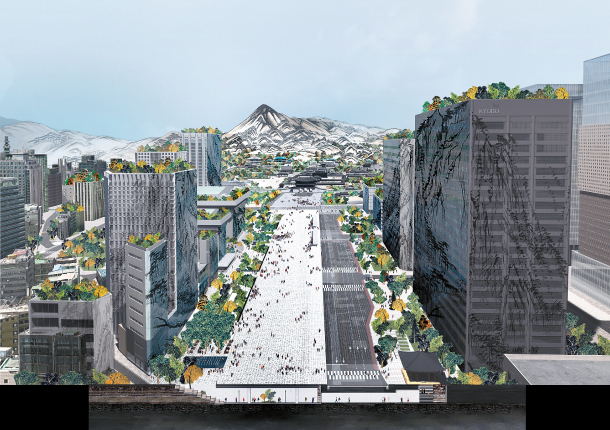 An artist’s rendition of a bird’s-eye view of the Gwanghwamun area in central Seoul after it is redeveloped both above ground and below. [SEOUL METROPOLITAN GOVERNMENT]

In two years, Gwanghwamun Square may be grander above ground and more complex below as the Seoul city government plans to remove structures on the square and build an underground plaza connecting at least five different subway and train lines.

The Seoul Metropolitan Government announced Monday that it selected a blueprint to renovate the square in central Seoul located south of Gyeongbok Palace by 2021.

“The announcement today is about more detailed plans to a project that was proposed last April with the Cultural Heritage Administration,” the city government said in a statement Monday.

“We have decided on a winning design for the square that will focus on bringing back the historical value of the square and making it more pedestrian-friendly.”

A seven-person committee comprised of architects including Dominique Perrault and Seung Hyo-sang, chief commissioner of the Presidential Committee on Architecture Policy, selected a design by a team of architects including Jin Yang-gyo of CA Landscape Design Company. There were some 70 other designs competing, including international bids from Austria, Italy and 15 other countries.

“It was closest to what the city government had initially envisioned the renovated square to look like, after incorporating public opinion on the kinds of changes people would like to see,” said Seoul Mayor Park Won-soon at a press conference at City Hall on Monday.

The working blueprint, named “Deep Surface,” can be understood in two parts. “Firstly, the renovation will restore the historical structure of the area,” the city government said. 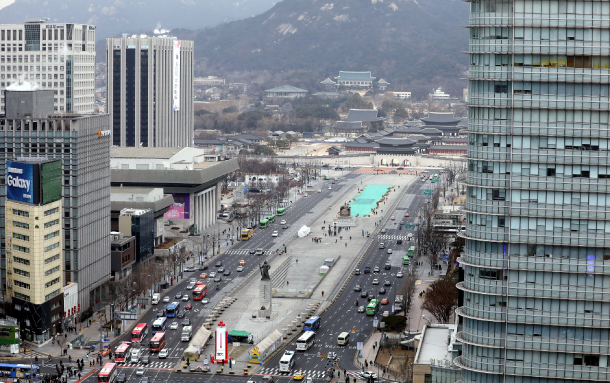 The photo of the Gwanghwamun area taken on Monday. [SEOUL METROPOLITAN GOVERNMENT,NEWS1]

This involves bringing back a terrace from the Joseon Dynasty(1392-1910) that was north of Gwanghwamun Square for the kings to hold public rituals. The terrace is called Woldae in Korean.

“The Gwanghwamun area has undergone a series of changes since the Japanese annexation of Korea, and we intend to bring back its historical value,” Park said.

Japan annexed Korea from 1910 to 1945. In 1926, the Japanese built their general government building north of Gwanghwamun, a sign of Tokyo’s power, and the gate was moved eastward. The Woldae was lost in the process and has not been restored.

“We also plan to restore the historical pathway from Gyeongbok Palace, through Gwanghwamun, going down south past Namdaemun, through the Yongsan area and towards the Han River,” the city government said. “This pathway [from the Joseon Dynasty] must be recovered and preserved.”

The second part to the blueprint is about simplifying the space on the square and building a complex underground plaza.

“The point is to empty the space on the square and fill up the space underground,” the city government said.

“We intend to get rid of some structures on the square so that from any point on the square, you will be able to see Gyeongbok Palace and Mount Bugak behind it clearly. Our hopes are that this could encourage more large-scale events to be held on the square.”

The statues of King Sejong and Admiral Yi Sun-sin could be moved. The blueprint proposed by the winning team suggested that Admiral Yi be moved to the lawn in front of the Government Complex south of the palace and King Sejong nearer to the Sejong Center for the Performing Arts.

“The decision has not been made yet, and we will be canvassing public opinion regarding this suggestion by the team,” Mayor Park said.

Gwanghwamun Square will expand to include the southbound lanes of traffic in front of the Sejong Center, according to the working blueprint. The current 10-lane road that rings the square will be reduced to six-lanes.

“We’re working on how traffic will be managed in the area while the roads undergo construction,” said Kang Maeng-hoon, deputy mayor of urban regeneration for the city government. “They will be tackled one section at a time to minimize possible inconveniences.”

If all goes as planned, by 2021 there will be a 2.5-mile long underground space stretching south from the Gwanghwamun area to the City Hall area, and eastbound from there through the Euljiro area towards Dongdaemun.

“The point is to give an option to pedestrians to walk all the way to Gwanghwamun Square from as far as Dongdaemun in whatever weather,” said the city government. “The underground plaza will be filled with halls for concerts and exhibitions, and other spaces for the enjoyment of culture.”

Though it has not been laid out in detail in the proposed blueprint, the city government intends to connect Gwanghwamun Station to City Hall Station underground.

Pedestrians underground may gain access to as many as five different subway and train lines.

“In addition to subway lines No. 1, 2 and 5, we intend to have the GTX-A high-speed rail line make a stop at Gwanghwamun Station,” the city government said. “We have set apart some funds for the project. A feasibility test will be completed within this year.”

The GTX-A line, under construction by the Ministry of Land, Infrastructure and Transport, begins at Unjeong, northwest Gyeonggi, passes through Seoul Station and Samseong-dong in Gangnam District, southern Seoul, and extends to Dongtan, southern Gyeonggi.

It is to be the first high-speed rail serving the greater Seoul area and is expected to be completed by the end of 2023.

The city government also intends to connect the Shinbundang Line, which runs from Gwanggyo Station in Suwon, Gyeonggi, to Gangnam Station in southern Seoul, to the GTX-A line.

The city’s proposal is to extend the Shinbundang Line towards Seoul Station in central Seoul, which will meet the GTX-A line, and diverge to continue north through Eunpyeong District and end at Samsong Station in Goyang, Gyeonggi.

Altogether, the project to renovate Gwanghwamun Square, above and below, will cost 104 billion won ($92.4 million), 66.9 billion won of which the city government will cover. The remaining costs will be covered by the Cultural Heritage Administration.

“By 2021, Seoul will have what is like Trafalgar Square in London and La Place Charles de Gaulle in Paris,” said Mayor Park. “The Gwanghwamun area, which was at the center of Seoul’s 600-year history, will be handed back in its true form to the people.”