Outbreak of measles grows to 30 sufferers

Outbreak of measles grows to 30 sufferers 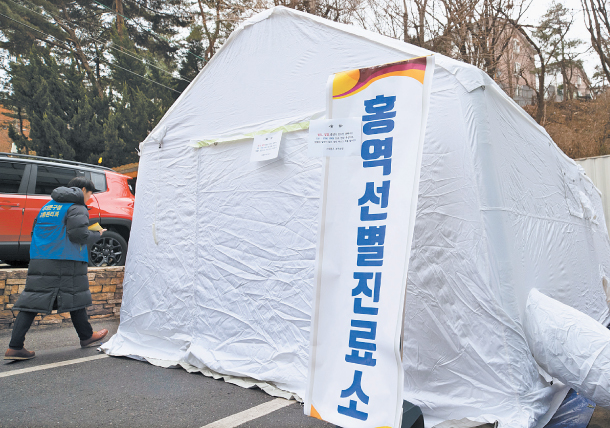 Seoul set up a measles prevention clinic Monday at Seodaemun District, western Seoul, in response to a recent outbreak. The center is open for people who wish to get a vaccination or test if they have antibodies for the disease. [YONHAP]

A measles outbreak shows no signs of slowing down as four new patients were added to the list Monday, bringing the total to 30, according to the Korea Centers for Disease Control & Prevention (KCDC).

Two of the new patients reside in Gwangju and Seoul, regions that were previously measles-free.

This year’s measles outbreak started in Daegu in December, when two children were admitted to the Daegu Fatima Hospital. As of Monday, most of the 30 infected people reside in North Gyeongsang and Gyeonggi.

This is the highest number since 2015, when seven patients were reported to have the measles. 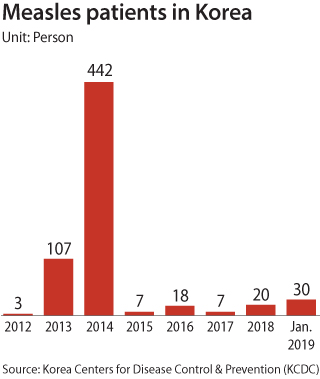 According to the KCDC Sunday, this year’s outbreak is affecting both infants - too young to be vaccinated against the disease - and young adults.

Korea was proclaimed a measles-free country in 2006, but as of Sunday, 12 of the patients were adults in their twenties and thirties. Officials said there is a logical explanation.

In order to fully prevent measles, vaccination shots need to be taken twice - once when an infant hits 15 months and again when the child turns four. It was only in 1997, however, when the second vaccination became mandatory.

The people catching measles now in their 20s and 30s were born between 1983 and 1996, and only received the first vaccination.

There are some people from that generation who voluntarily got a second vaccination. But it may not protect them, experts say.

“Even if one did get a second vaccination shot, there is a probability that [the shot] would not have been effective because, in the past, refrigerated facilities for the vaccination were inadequate,” said Cho Eun-hui, an official from the KCDC.

The KCDC was careful to point out that one vaccination shot was better than none in fighting off the disease.

According to the officials, all 12 young adult patients have shown measles symptoms to only a moderate degree. This is presumably because they received the first vaccination as infants.

“Some patients have shown inflammation on their face only, others only on their bodies and one only has it on the hands,” said Cho. “Two patients did not even suffer from high fever.”

In response to the outbreak, officials from the Ministry of Health and Welfare are tracking down about 470 people who came in contact with 26 of the patients in an attempt to stop it from spreading further. Time is of the essence as the Lunar New Year holiday is approaching, and people who have been infected might spread it as they travel back to their hometowns.

The KCDC has cautioned people to check if they have antibodies for measles before traveling overseas as the type of measles now spreading was proven to have originated in Europe.

Measles is a highly infectious airborne disease. Symptoms typically include high fever and inflammation of the skin 10 to 14 days after exposure. There is no specific treatment. Patients have to wait until the body creates an antibody responding to the virus for them to fully recover.