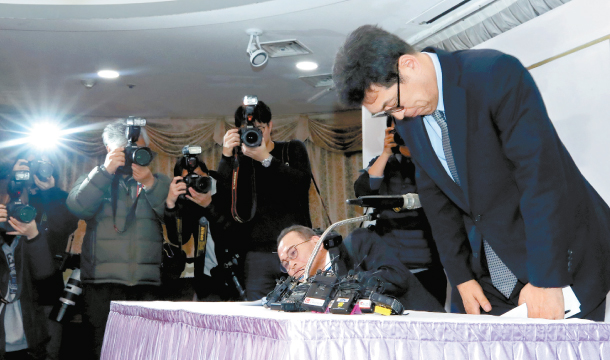 Jeon Myung-kyu, a professor at Korea National Sport University, responds to allegations made against him by Rep. Sohn Hye-won at the Seoul Olympic Parktel in southern Seoul on Monday. [YONHAP]

A lawmaker called for a probe of the so-called godfather of Korean speed skating amid the ongoing scandal over coaches sexually assaulting skaters.

Rep. Sohn Hye-won, an independent lawmaker after her exit from the ruling Democratic Party Sunday due to a real estate scandal, called for an investigation of Jeon Myung-gyu, a professor at Korea National Sport University, former vice chairman of the Korea Skating Union (KSU) and former head coach of the Korean national short-track team.

Jeon resigned as vice chairman of the KSU in April last year following repeated accusations of favoritism and criticism of his results-based approach.

Last year’s resignation was the third time that Jeon was forced to resign from the KSU before being reappointed some years later.

Sohn said that she supervised an investigation by a group dedicated to eradicating “deep-rooted ills” in the speed skating community. The investigation discovered six other cases of sexual abuse in the skating world beyond that reported by elite skater Shim Suk-hee, which made headlines over the past few weeks.

None of the six victims wanted to be named because they feared retribution. However, Sohn said Jeon was aware of at least one of the sexual assault claims, and she suspects Jeon knew about the abuse, which started the current scandal, of two-time Olympic gold medalist Shim and chose not to do anything about it.

“One athlete disclosed that she was sexually attacked by her coach when she was a teenager,” said Sohn in a press conference Monday.

According to the athlete, the coach initiated unwanted physical contact on the pretext of teaching her skating positions. However, the sexual abuse continued even after training stopped.

Sohn released alleged text messages between the athlete and Jeon.

The athlete wrote, “I’m the one who thinks about dying every other day.” Jeon allegedly responded, “I hope that you quickly come out of this situation. This is of the uttermost importance.”

“Professor Jeon was aware of the skater’s plight, but did not take any disciplinary action to stop the assaults,” said Sohn. “Most perpetrators have not received any punishment or disadvantage for the sexual abuse [they committed].”

In response to Sohn’s claims, Jeon came forth Monday to deny the charges against him.

“I was not aware of any abuse that was occurring, including Shim’s,” said Jeon. “People might question how I could be ignorant about Shim’s case, but in my defense, she was a part of the national team and thus was not under my supervision once she was enrolled at Korea National Sport University.”

Jeon did admit that there were times when he thought that Shim’s ex-coach placed radical restrictions on her during training, but he was never aware of sexual abuse.

“However, this does not mean that I am avoiding responsibility about the problems that have recently occurred,” he said.

Jeon apologized to Shim. Jeon was quick to add that the public needed to be suspicious about the group that claimed to investigate him.

“The media should look into the [background] of the members of the group,” said Jeon.

When a reporter showed the text message evidence released by Sohn to Jeon, he replied by saying he was not aware of them and refused to say if the text messages were really his.