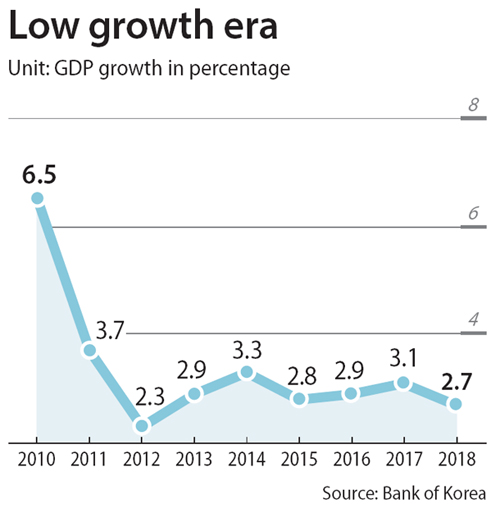 Last year’s growth was not only the lowest in six years, but it was artificially propped up by heavy government spending in the fourth quarter.

According to the Bank of Korea (BOK) on Tuesday, Korea’s economic growth fell from 3.1 percent growth in 2017 to 2.7 percent, the lowest since the economy grew 2.3 percent in 2012.

After seeing 6.5 percent growth in 2010, annual economic growth has remained between 2 and 3 percent.

The BOK report showed that growth was able to reach 2.7 percent largely thanks to an increase in government spending, which grew 5.6 percent compared to the previous year. Export growth was 4 percent thanks to buoyant semiconductor exports and private consumption grew 2.8 percent.

That government spending was concentrated in the last three months.

While the economy grew 2 percent through the first three quarters, in the last quarter, it grew 3.1 percent. It was the first 3 percent growth since the third quarter of 2017.

The BOK said non-residential construction projects and infrastructure projects saw an increase in the fourth quarter.

Local governments elected in June 2018 started many projects that had been put on hold, said Park Yang-su, director general of economic statistics at the BOK, boosting growth in the fourth quarter.

When compared quarterly, construction investment grew 1.2 percent in the fourth quarter compared to the third, which was a turnaround from negative growth in the previous two quarters.

Consumer spending grew 2.8 percent on an annual basis, higher than 2017’s 2.6 percent growth. However, when compared quarterly, spending in the fourth quarter grew 2.5 percent, the same as the third quarter and down from 2.8 percent in the second quarter.

Last year, facilities investments by private business fell 1.7 percent. In 2017 the same investments were up 14.6 percent compared to the previous year.

The biggest concern is, however, a deteriorating global economy.

On Monday, the International Monetary Fund lowered its estimate for global economic growth this year from 3.7 percent - its prediction made in October - to 3.5 percent, citing numerous risks including the U.S.-China trade dispute and Brexit.

Korea’s exports are already showing signs of distress. Although exports grew 6.5 percent in the fourth quarter on an annual basis, they showed a 2.2 percent decline on a quarterly basis, the first such drop since the last quarter of 2017, when exports fell 5.3 percent quarterly.

According to an estimate by the Korea Custom Service in the first 20 days of this year, exports have fallen 14.6 percent when compared to the same period a year ago. Especially worrying is the fact that major export goods are dropping, like semiconductors (down 28.8 percent) and ships (down 40.5 percent).

Last October, the BOK projected this year’s growth at 2.7 percent.