HA SUN-YOUNG
The author is an industrial news reporter of the JoongAng Ilbo. 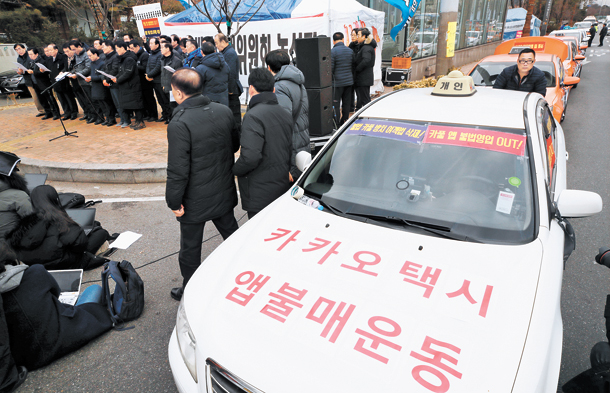 Rep. Jeon Hyun-heui, chairwoman of the ruling Democratic Party’s (DP) special task force on shared mobility, has said saving the taxi industry is the main purpose of a new consultative body aimed at finding a grand social compromise between the taxi and carpool industries. The group was launched Tuesday. “The top priority is reviving our outdated taxi industry,” she said in a press conference at the National Assembly on Jan. 18. “I will realize the wishes of 1 million taxi workers and their families.”

The consultative group will be joined by the ruling party, the government, taxi and carpool industries to resolve the extreme resistance of the taxi industry against new carpool services. The taxi industry, which refused to participate in the initiative, agreed to join the consultation after Kakao suspended its carpool pilot service on Jan. 18 without any conditions. But the information communication technology industry, including carpool service companies, have no expectations for this consultative body. They think the initiative is only designed to please the taxi industry.

The DP and the Ministry of Land, Infrastructure and Transport have proposed resolutions designed to reform the structure of Korea’s taxi industry, rather than introduce carpool services. Scrapping the current system — in which corporate taxi drivers pay a certain amount of their earnings to the companies — introducing a salary system and offering rewards for reducing the number of taxies are all aimed at improving treatments for taxi drivers. They are not related to carpool services. Even if the taxi industry’s problems are resolved, it does not mean that better conditions will be created to introduce carpool services.

The DP already set up a task force on shared mobility in November last year. The team worked for two months, but failed to present visible progress. The taxi industry has insisted the government must not allow the launch of carpool service apps and rejected all compromises offered by both the government and the ruling party.

Amid the deadlock, carpool service companies lost the golden time. Kakao Mobility launched its pilot service on Dec. 7, 2018, but stopped after one month due to fierce protests from the taxi industry. Now, the taxi industry said it will join the grand social compromise initiative, but it still insists that it won’t allow Kakao to launch the service.

As a result, the government and the ruling party are putting all their efforts to satisfy the taxi industry. Although carpool services have been popular in other countries for several years, many people worry that Korea will never see its launch. Concerns are mounting that the problem will never be solved as long as the government and the ruling party are bent on “realizing the wishes of 1 million taxi workers and their families.” The taxi industry, government and ruling party must think seriously why the public are more supportive of introducing a carpool service.