[National Treasure] Stone Guardian from the Tomb of King Muryeong

[National Treasure] Stone Guardian from the Tomb of King Muryeong 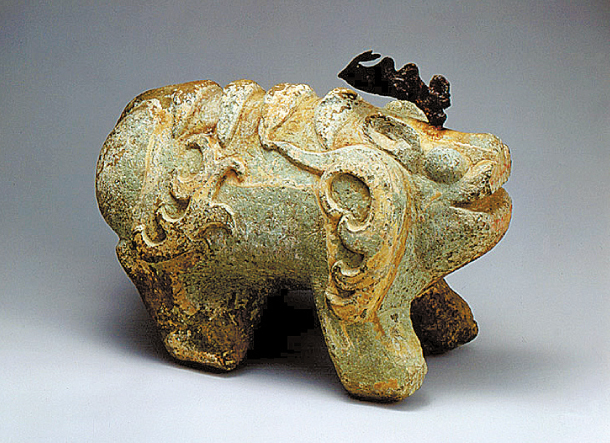 
Stone animal statues are usually placed in front of tombs, palaces or inside of tombs, but they can also be carved on the base part of stone pagodas.

They originated from the funeral custom of the Later Han.

At that time, Chinese people put stone animal statues in front of or around a tomb with the belief that the statues could protect the tomb.

This stone statue was discovered in the central aisle of the Tomb of King Muryeong, the 25th king of Baekje.

It has a blunt muzzle and its lips still bear traces of red paint on them. It also has eyes, ears and a big nose without nostrils. There is a leaf-shaped steel horn attached above the head.

Flame patterns are engraved on the right and left sides of the body and also on the front and rear legs. These patterns are believed to be images of wings.

Despite the effort, it is generally considered of lower quality than other relics discovered from the royal Tomb of King Muryeong.

It’s the first stone animal statue that was used as a guardian of a tomb to be excavated in Korea.

This tomb was built for King Muryeong, who reigned from 501 to 522, and his queen.

It’s one of the most well-known royal tombs because it is one of the rarer tombs that was built with bricks, and also a great amount of burial goods - 2906 remains ranging over 108 categories - were excavated from it.