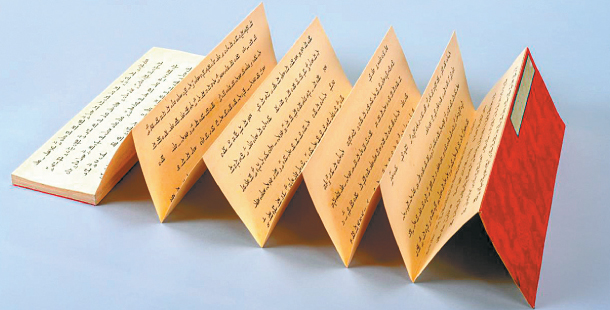 Princess Deokon’s translation of “Jagyeongjeongi,” written in hangul (Korean alphabet) was shown to the public for the first time last week at the National Hangeul Museum in central Seoul. [CULTURAL HERITAGE ADMINISTRATION]

The writings of Korea’s last legitimate princess, Deokon (1822-44), written in Korean script, have been returned to Korea after centuries abroad. The documents include 68 pieces of writing such as books, letters and calligraphy works handwritten by the princess and her descendants of three generations.

The Cultural Heritage Administration announced last week that it managed to bring back the writings from the princess’ descendants who are now residing in the United States. Among them are valuable items including two books “Jagyeongjeongi” and “Gyuhun,” which were handwritten by Princess Deokon. According to the administration, these writings are regarded valuable for their rarity.

Princess Deokhye (1912-89), the daughter of Emperor Gojong (1852-1919), is widely known as the last princess of Korea. However, according to the administration, since Deokhye’s mother was a concubine, she is known as an ongju, a Korean term that refers to a king’s daughter by a concubine, making Deokon, the last daughter of King Sunjo (1790-1834) and Queen Sunwon (1789-1857), the last gongju, or legitimate princess of Korea.

These writings were made public for the first time on Jan. 16 at the National Hangeul Museum in central Seoul, allowing visitors to see some extraordinary examples of court writings in hangul (Korean alphabet).

“Jagyeongjeongi” was originally written in Chinese characters by King Sunjo in 1808 to explain the origin of the Jagyeongjeon Chamber in Changgyeong Palace. The chamber was established by King Sunjo’s father, King Jeongjo (1752-1800), in 1777 to wish for the longevity of his mother Queen Heongyeong (1735-1816), also known as Lady Hyegyeong. The book written in Chinese characters was then translated into Korean and written in hangul by Princess Deokon.

The exact year this hangul version was created is unknown, however, according to Korean linguist Lee Jong-deok. “It seems like it had been more than 10 years since Princess Deokon learned to write in hangul when she handwrote this book,” said Lee.

“Gyuhun,” which is a guide of women’s virtues and manners, is also regarded valuable as it was also translated from Chinese characters to hangul by Princess Deokon. Other writings include calligraphic works and letters written by the princess’ adopted son Yun Yong-gu (1853-1939) and his daughter Yun Baek-yeong (1888-1896). Princess Deokon got married when she was 15 but died seven years after her marriage. The princess did not have a child of her own, but she adopted Yun when she was married.

The National Hangeul Museum plans to organize an exhibition in the near future to shed light on valuable hangul writings of the royal family that prove that hangul, which was thought to have been used more often by commoners, was also widely used by the royals during the time of Princess Deokon.