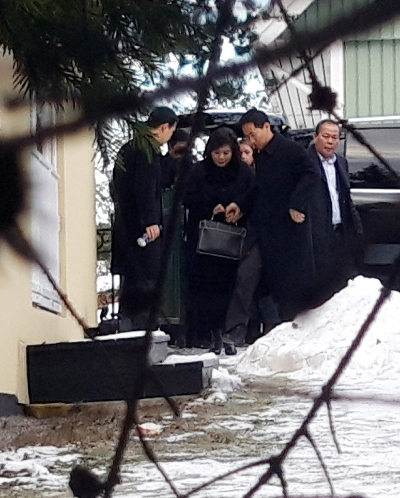 Denuclearization talks in Sweden by representatives from Pyongyang, Washington and Seoul went so well that they wrapped up a day earlier than planned, a South Korean diplomatic source said Monday.

But none of the envoys or the source, who spoke on the condition of anonymity, elaborated on the progress made. The trilateral discussions were held during a so-called Track 1.5 international conference involving government officials and non-governmental experts who convened in Sweden to discuss denuclearization in roundtables. The conference was hosted by the Swedish Foreign Ministry.

A Swedish Foreign Ministry spokesman briefly said that “constructive talks” were held during the conference concerning “developments on the Korean Peninsula, including confidence building, economic development and long-term engagement,” according to Reuters. This Track 1.5 meeting was strictly off the record and participants weren’t allowed to reveal what transpired.

As the group was talking in Sweden, the U.S. State Department announced that U.S. Secretary of State Mike Pompeo held a telephone conversation with South Korean Foreign Minister Kang Kyung-wha on Sunday, Washington time, and that they updated each other on respective U.S. and South Korean engagements with the North. Pompeo and Kang affirmed the enduring strength of the U.S.-South alliance, the department said in a statement.

Of the same call, South Korea’s Foreign Ministry said they exchanged views on the planned second summit between the leaders of North Korea and the United States and agreed to continue close cooperation between Seoul and Washington so that the summit can be successfully held.

But neither government mentioned anything about the discussions in Sweden.

The main participant from North Korea in the Sweden talks was Vice Foreign Minister Choe Son-hui. Stephen Biegun, the U.S. special representative on North Korea, and Lee Do-hoon, the South Korean Foreign Ministry’s special representative for Korean Peninsula peace and security affairs, were their countries’ main participants. It was the first time Choe and Biegun met face-to-face. Biegun was appointed Washington’s nuclear envoy late last August but never had the chance to meet his North Korean counterpart due to a deadlock between the two countries.

Tokyo dispatched Kenji Kanasugi, director general of the Japanese Foreign Ministry’s Asian and Oceanian Affairs Bureau, to talk with Biegun. According to the Japan Times, Japan’s Foreign Ministry said Kanasugi will hopefully be updated on arrangements for the second U.S.-North summit.

In the three-way negotiations involving Choe, Biegun and Lee, the key item on the agenda was expected to be the second summit between North Korean leader Kim Jong-un and U.S. President Donald Trump, set for late February, but further details of the upcoming leaders’ meeting, including the venue, precise date and agenda were not to be made public until the representatives returned to their countries and reported to their governments.

Lee traveled to Davos, Switzerland, where he planned to give the latest updates to South Korean Foreign Minister Kang when she arrives for the World Economic Forum, which was set to kick off Tuesday, Davos time.

The aforementioned South Korean diplomatic source said Choe, Biegun and Lee shared very candid talks over three days starting from Saturday evening on the outskirts of the Swedish capital of Stockholm. Throughout their time in the European country, the source continued, they ate at least five meals together. Lee was said to have played the role of mediator as South Korean President Moon Jae-in does between Trump and Kim. Sometimes, the discussions were split into bilateral talks between Choe and Biegun or Choe and Lee.

Biegun left the convention building at around 10:45 a.m. on Monday, after which Choe left at about 12:50 p.m. Choe flashed a mild smile on her face when reporters asked how the talks went.

The Choe-Lee-Biegun negotiations followed Trump’s meeting with a high-level North Korean official in Washington last Saturday, who visited the White House to hand-deliver a letter issued by North Korean leader Kim Jong-un. Trump did not release details of it, but the White House announced that a second summit between Kim and Trump was officially on for late February. Trump told reporters that a host country had been chosen but that it will be announced later.

According to a South Korean diplomatic source with knowledge of Pyongyang-Washington relations, Kim told Trump in his letter that he was prepared to meet him anytime to discuss “what the international community wants,” apparently referring to Pyongyang’s denuclearization. Kim also mentioned implementing the four main agreements he and Trump reached in Singapore last June during their first summit and stressed that North Korea was willing to denuclearize, but that the United States has to deliver reciprocal measures.

The North Korean official who visited Trump, Kim Yong-chol, is said to have explained to Trump that in case the United States doesn’t reward North Korea with reciprocal measures, Pyongyang would have no other choice but to seek “a new path.” Kim Yong-chol is a vice chairman of the ruling Workers’ Party’s Central Committee.

In his New Year’s address on Jan. 1, Kim Jong-un said that if the United States “persists in imposing sanctions and pressure against our Republic [North Korea], we may be compelled to find a new way for defending the sovereignty of the country and the supreme interests of the state and for achieving peace and stability of the Korean Peninsula.”

Meanwhile on Monday, an American think tank released a report about what it said was a North Korean operational missile base undeclared by the regime and urged it to be a subject of denuclearization negotiations.

Beyond Parallel, a database website run by the U.S. Center for Strategic and International Studies, released satellite images of Sino-ri, located 212 kilometers (132 miles) north of the inter-Korean border in North Pyongan Province, and said it housed a regiment-sized unit equipped with Rodong-1 medium-range ballistic missiles that can target any point on the Korean Peninsula and most of Japan, but not the U.S. mainland.

“It is one of the oldest of approximately 20 undeclared missile operating bases and is reported to serve as the headquarters of the Strategic Rocket Forces Nodong [Rodong] missile brigade,” the analysis read, adding that it may also have played a role in the development of the Pukguksong-2 medium-range missile, which was first tested on Feb. 12, 2017, shortly after Trump’s presidential inauguration.