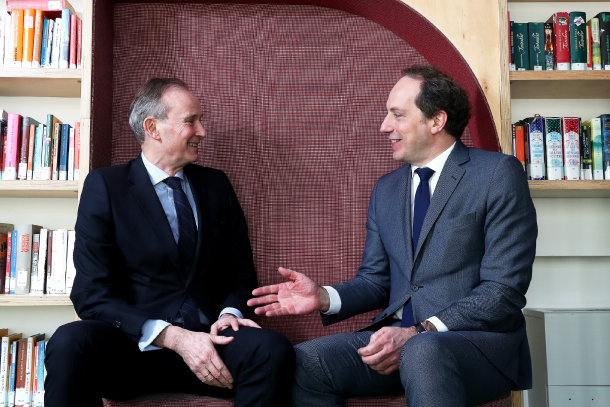 From left, German Ambassador to Korea Stephan Auer and French Ambassador to Korea Fabien Penone sit for an interview with the JoongAng Ilbo and the Korea JoongAng Daily at the Deutsche Schule Seoul International in central Seoul on Tuesday. The two envoys met with students from the Deutsche Schule Seoul International, Lycee Francais de Seoul and Lycee International Xavier to commemorate Franco-German cooperation stemming from the 1963 Elysee Treaty. [JANG JIN-YOUNG]

Diplomats and students alike had their eyes on a screen in a classroom of the Deutsche Schule Seoul International Tuesday morning, ready for the next question in an online quiz.

“Quel jour est celebre le 22 janvier?” read the question on the screen. What day is celebrated on Jan. 22?

On that day 56 years ago, French President Charles de Gaulle and German Chancellor Konrad Adenauer signed a treaty on Franco-German cooperation at the Elysee Palace in France, more commonly called the Elysee Treaty. The treaty was an effort by the two leaders to chart a new path of cooperation in bilateral relations rather than rivalry or war.

“I am honored to be here to celebrate the day and discuss the importance of Franco-German friendship going forward,” French Ambassador Penone told the class in German.

“It’s been 56 years, and now we are moving forward to work closer on security, economy, culture and other areas,” German Ambassador Auer told the class, speaking in French, in response to a student’s question.

Also on Tuesday in Aachen, Germany, German Chancellor Angela Merkel and French President Emmanuel Macron signed the Treaty of Aachen to follow up the 1963 Elysee Treaty.

To celebrate Franco-German friendship this year, the embassies of France and Germany are planning a host of joint programs with students, entrepreneurs and artists.

Before moving on to meetings with embassies, schools and the chambers of commerce and industry, the two envoys sat down for an interview with the JoongAng Ilbo and the Korea JoongAng Daily on Tuesday.

Q. Foreign policies are often swayed by partisan interests of domestic constituents. What were some of the obstacles Germany and France had to overcome to maintain close diplomatic cooperation?

A. Fabien Penone: The French-German friendship goes beyond political parties. We have learned lessons through the terrible history of our two countries throughout the first half of the 20th century, so that every citizen in France and Germany knows it is important to work together and develop joint interest and projects. The motivation to work together stems from the people as well, not just politicians.

Stephan Auer: You spoke of what kinds of obstacles we had to overcome - there was resentment in the population due to long wars we have had. But that was overcome because we had visionary politicians in both France and Germany. But as Ambassador Penone said, it was not only a project of the elite but it was carried out and accepted by the population. We have had eight million exchanges between the young, due to the Franco-German Youth Office’s work.

Some experts recommend that Korea and Japan benchmark the Elysee Treaty to improve relations often disturbed by the history of Japan’s annexation of Korea.

Penone: It is not possible to make historical comparisons between different regions, but we would say just that it was very important for both France and Germany to face our past together. For instance, we launched the joint history textbook. You can imagine how difficult it was as we didn’t have the same views of historical events. So this was an important endeavor to overcome the fragmented past. We think it is very important for Korea and Japan to work together because we need two democracies in Northeast Asia with us to consolidate globalization to our values and interests and to save multilateralism and the liberal order.

Do you think there is added significance to celebrating the Treaty of Elysee in Korea, the only remaining divided country in the world?

Auer: I think there is. Franco-German friendship is a good example of how you can overcome so-called hereditary animosities or rivalry from wars and come together to define common interests and develop friendship on that basis. Also important in the process is to have consistency in your approach - not just having four or five years of detente and four or five years of clashes.

Penone: Both sides have to make efforts for reconciliation - we have to say now is the time to overcome the past and frankly to look toward the future and to build a future together. This is what each president and chancellor has done over the last decades and the new Treaty of Aachen is another brick in this process.

Auer: It is also important to note that this Franco-German friendship was a cross-party, bipartisan approach - all presidents and chancellors have always seen it as a raison d’etre to foster not only relations between the two countries but also the interest of European integration. You will see that European progress can only be achieved if there is a close understanding between France and Germany. If we don’t get along on certain issues, and there are issues that we have different views [on], then European integration doesn’t progress. And you will see that the Brexit is a challenge for us, but we will face it and we will manage it.