South Korea advance to quarterfinals with win over Bahrain

South Korea advance to quarterfinals with win over Bahrain 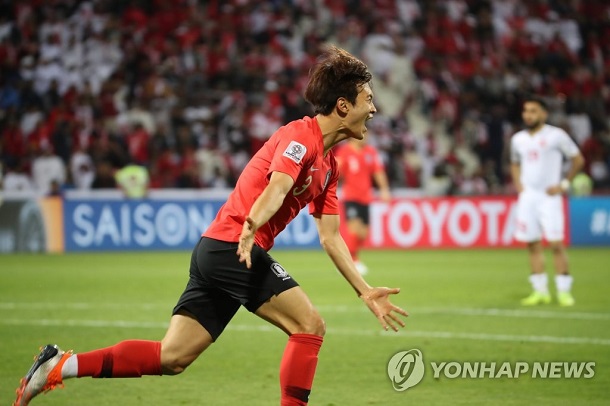 Kim Jin-su of South Korea celebrates his goal against Bahrain in the round of 16 at the Asian Football Confederation (AFC) Asian Cup at Rashid Stadium in Dubai, the United Arab Emirates, on Jan. 22, 2019. (Yonhap)

Fullback Kim Jin-su headed in the winner 17 minutes into extra time for his first international goal at Rashid Stadium in Dubai, as South Korea dodged a bullet and moved closer to ending their 59-year title drought at the continental competition.

In Friday's quarterfinals, South Korea will face Qatar, which knocked off Iraq 1-0 in the other round of 16 match on Tuesday.

South Korea have posted five wins, two draws and two losses against Qatar, and dropped their most recent meeting by 3-2 during the 2018 World Cup qualifying campaign in June 2017.

South Korea, ranked 53rd in the world, had a sluggish start against a team sitting 60 spots below. And it was Bahrain that had the match's first three shots in the opening moments, including Mohamed Marhoon's volley from the top of the box after a quick transition.

South Korea predictably enjoyed a substantial edge in ball possession but barely tested Sayed Shubbar Alawi in the Bahrain net early on. And Bahrain played South Korea straight up and created some decent looks on net, rather than sitting back on defense and crowding their own box.

The first dangerous chance for South Korea came in the 33rd minute, when Hwang Hee-chan snuck through the defense to get in deep on Alawi but never got a shot off.

Hwang made his next opportunity count in the 43rd minute, as he benefited from some nifty passes.

Son Heung-min, Tottenham Hotspur's offensive star playing as an attacking midfielder, started the play with a diagonal pass to fullback Lee Yong on the right wing. Lee one-timed a low cross toward the middle, and when the attempt went off the sliding Alawi and left the defense scrambling, Hwang was the Johnny on the Spot in front of the goal and calmly rolled the ball into the gaping net.

It was South Korea's first shot on target in the match.

Bahrain looked determined to go down swinging, and they were clearly the better side in the second half, as they continued to apply attacking pressure and put South Korea back on their heels.

With the defense in front of him struggling to clear loose balls, goalkeeper Kim Seung-gyu stepped up with his best save of the match in the 70th, punching out Jamal Rashed's curling shot from the right edge of the box to preserve a 1-0 advantage.

But the lead only lasted seven more minutes, as Mohamed Al Romaihi scored the equalizer after a fortuitous bounce.

With Hwang Hee-chan on the ground in his own zone in apparent pain, Bahrain kept pushing the ball into the danger zone, rather than kicking the ball out of play, as is the convention in football.

With the man advantage, Mahdi Alhumaidan got behind the defense and fired a shot past Kim Seung-gyu. Defender Hong Chul cleared the ball right at the top of the goal line but it landed on the foot of Al Romaihi, who pounced on the rebound to make it 1-1.

This was the first goal against South Korea at the tournament.

South Korea failed to respond in regulation, though Hwang Ui-jo, the team's co-leading scorer with two goals, came close during added time when his shot on a fast-break opportunity rolled just wide of the right post.

South Korea missed a couple of opportunities in the opening moments of extra time. And with the clock ticking down on the first extra half, right fullback Lee Yong delivered a perfect cross to Kim Jin-su, his partner on the left side, for a wide-open header that put South Korea up 2-1.

As Lee charged down the right flank, Bahrain defenders stood around watching the ball as Kim snuck in behind them to get himself into open space. Abdulkarim Fardan, who replaced injured Alawi in the net earlier in the extra period, never had a chance.

Bahraini players were running on fumes down the stretch, and South Korea almost got an insurance goal in the opening moments of the second extra period, when Ju Se-jong's low shot rang off the left post.

Bahrain tried in vain to fight back, and South Korea hung on for the hard-fought win.

South Korea enjoyed a 71-29 edge in possession rate, while scoring their two goals on two shots on target. They had 16 shots overall, compared to 17 shots total and four on target by Bahrain.

South Korean players celebrated Kim's goal by holding up the jersey of Ki Sung-yueng for cameras. Ki, former captain, was dropped from the team on Sunday with a right hamstring injury, and his teammates kept Ki in their thoughts in their first knockout victory.