Moon beats the drum for a more fair economy

Moon beats the drum for a more fair economy 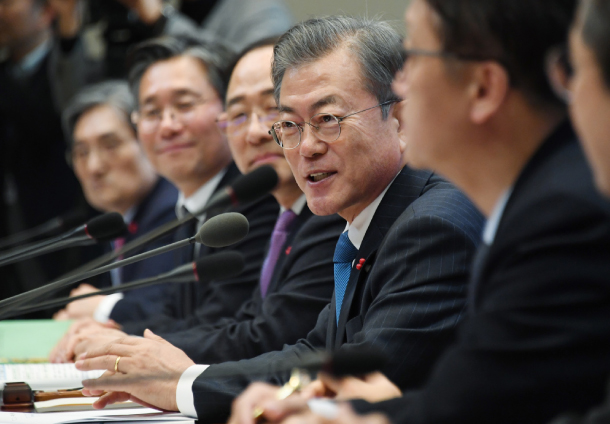 President Moon Jae-in, second from right, speaks during a fair economy strategy meeting held at the Blue House on Wednesday. It was the second such meeting. [YONHAP]

President Moon Jae-in on Wednesday emphasized that innovative and inclusive growth can only be achieved when there’s more fairness in the economy.

He said in order to achieve a fair economy, it is important for conglomerates to take responsibility, adding that the National Pension Service will actively exercise its stewardship code if the families controlling conglomerates violate the law.

“If we fail to protect innovative ideas and products, innovation will be buried,” Moon said at a strategy meeting for a fairer economy. A similar meeting was held last year.

“In my visit [to start-ups] earlier this year, I once again reaffirmed our innovation abilities through young people starting businesses with overflowing ideas and innovative products,” the president added. “However, even if there’s an abundance of good ideas, in order for these innovative ideas to succeed, there needs to be a social safety net.”

He said the best social safety net is a fair economy.

“Only when proper compensation [is given to innovative start-ups], based on the foundation of co-existence [of big and small companies], will innovation become more vibrant; and when the seed of innovative growth is fairly distributed, then an inclusive nation becomes possible.”

In the meeting, Moon particularly emphasized the role of conglomerates.

“Co-existence in the economy is something that must be achieved in order to achieve conglomerates’ innovative growth,” Moon said. “The government has continuously worked on improving ownership governance structures in order to strengthen the transparency and responsibility of conglomerate management.

Moon said as a result of the government’s effort, cross shareholding practices by conglomerates has dropped significantly last year. He also praised the Justice Ministry’s performance last year in collecting 4.4 billion won ($3.9 million) in fines in 25 cases of collusion in tender offers.

“From now on, the government will actively exercise the National Pension Service’ stewardship code against management when they commit serious violations of the law,” Moon said. “It will faithfully execute its responsibility as a shareholder, as entrusted by the people. We will correct wrongs and hold those responsible.”

Currently, the National Pension Service is weighting whether it will invoke its stewardship code against Hanjin Group’s founding family, the Chos.

The NPS is the third-largest shareholder of Hanjin Kal, the holding company of Hanjin Group, owning 7.34 percent. Hanjin Group Chairman Cho Yang-ho and his family are the largest shareholders, with a 28.93 percent stake, while the Korea Corporate Governance Improve (KCGI), an activist fund, is the second largest with 10.71 percent.

The main issue is whether to re-elect Cho Yang-ho as chairman of the group’s flagship company Korean Air. His current term ends in March.

The Cho family, including the chairman’s wife and two daughters, are accused of various violations of the law including smuggling and embezzlement.

The NPS is also the second-largest stakeholder of Korean Air with a 11.56 percent stake, while Hanjin Kal holds the largest stake of 33.35 percent. KCGI owns 8.03 percent of the airline.

If the NPS votes against extending Cho Yang-ho’s term, it will be the first time the stewardship code is put into practice since it was adopted last July.

“It’s worrying that the problems plaguing Hanjin Group will be the starting point [of exercising the code] and then will expand to other companies,” Sohn said. “[There needs to be a judgment] on whether [the stewardship code] will be looking into temporary issues or long-term corporate management.”