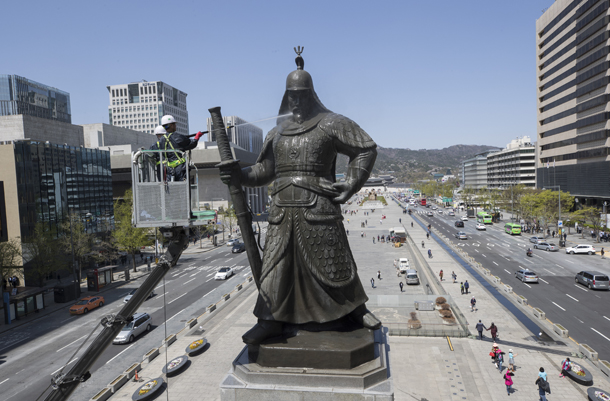 The main axis of downtown Seoul today is the road from Gyeongbok Palace through Sejong-ro and Taepyeong-ro to Namdaemun. It was different in the Joseon period (1392-1910). The center was Gwanghwamun-Gwanggyo-Namdaemun. During the Japanese occupation (1910-1945), Japan expanded Taepyeong-ro and changed it to what it is today. The intention was to provide easy access to Gyeongbok Palace for the Japanese army in Yongsan. During the Park Chung Hee administration, there were calls to restore the old path, but it wasn’t cheap. Park decided a statue of a person whom Japan feared most should be erected instead.

That’s how the statue of Admiral Yi Sun-shin, was built. Late Seoul University Prof. Kim Se-jung was in charge of the production. The statue was 6.3-meters (21-feet) tall — 16.8 meters, including the pedestal — and weighted 8 tons (17,637 pounds). There were not enough materials for the statue at the time. Empty shells, brassware and scrap metal were used. Production was frequently halted as materials were not provided on time. It took 13 months to complete the statue, which was unveiled on April 27, 1968.

The statue of Admiral Yi Sun-sin suffered as much as Yi himself, who was framed and underwent hardship. After it was unveiled, it was criticized for being historically inaccurate. The statue holds a sword in its right hand, as if the general were surrendering. Some argue the sword is Japanese in design, while the armor is Chinese. In the late 1970s, the government decided to recreate the statue, but after Park was assassinated and the regime changed, the plan fizzled out.

In 1994, the government considered moving the statue in order to erect a statue of King Sejong in Sejong-ro. Admiral Yi was going to be moved to Chungmu-ro. But Seoul opposed it, as the statue had already become the symbol of Sejong-ro. Relocating the statue was reconsidered when the pedestrian path in Sejong-ro was expanded in 2004 and Gwanghwamun Square was created in 2008. In an online poll in 2004, 87 percent of respondents opposed the plan to move the statue.

Relocating the statue is once again up for debate as the city of Seoul recently announced a plan to expand Gwanghwamun Square. The statue is to be relocated to the front of the government complex. The plan has been met with resistance. When selecting the winner, the evaluators of the Gwanghwamun Square project mentioned that the statue had historic significance and should remain in place.

The city took a step back and now plans to evaluate public opinion. I have no reason to discourage this process. The process of asking people’s opinion and making a decision is a form of history and culture in itself. But I hope there won’t be fierce confrontation with factional rhetoric in the public discussion. After all, is that what Admiral Yi would have wanted?