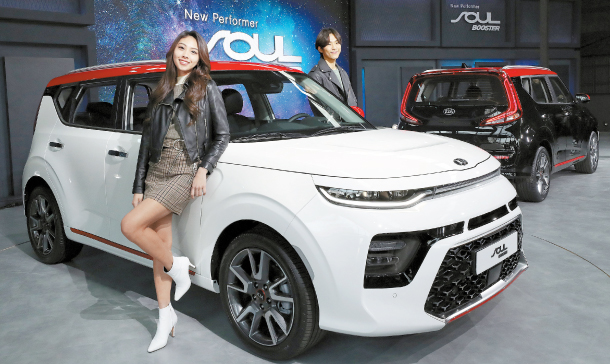 Kia Motors rolled out the third-generation Soul crossover SUV in the domestic market on Wednesday.

A fully-fledged upgrade to the car comes for the first time in six years after the second generation was launched in 2013.

The latest Soul, nicknamed the Soul Booster in Korea, will hit the roads with either a 1.6-liter gasoline engine or an electric motor with a maximum driving distance of 386 kilometers (240 miles) per charge, the automaker said.

Currently, only the gasoline model is available. The company said it will release the new Soul EV in February, but didn’t provide an exact date. 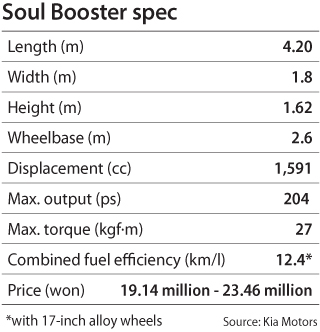 Kia Motors plans to sell 20,000 units of the latest Soul this year. Of that figure, 18,000 units will be gasoline and the rest will be EVs, according to Kim Myung-seob, general manager of the domestic marketing team for the carmaker.

The price of the gasoline Soul ranges from 19.14 million won ($17,000) to 23.46 million won depending on users’ selection of various options like driver assistance system. The exact price tag for the EV model wasn’t revealed, but the company said it will be between 46 million won and 49 million won.

While the Soul is a popular entry level crossover vehicle in North America, its presence in the domestic market is rather weak. The company hopes to change that by positioning the Soul in the small SUV segment that is increasingly growing in popularity in Korea.

To give a sleeker feel, the company used narrower and flatter headlamps and wraparound tail lamps.

When the Korea JoongAng Daily got behind the wheels of the Soul Booster Wednesday for a 130 kilometer drive between Gangdong District, eastern Seoul, and Pocheon, Gyeonggi, this reporter could feel the improvement in the driving performance.

The car boasts a maximum output of 204 metric horsepower (ps), which is the best offering among competing small SUVs, and also a large improvement from the 132 ps the previous generation Soul offered.

As this reporter pressed on the accelerator, the car had no problem speeding up smoothly to above 130 kilometers per hour (81 miles per hour), though it seemed bumpy at times on uneven roads. The car also got quite noisy as it sped up, but this might please people who like their driving experience to involve a bit of drama.

The new version is more spacious as well. Kia said the car’s length increased by 55 millimeters (2.17 inches), its height by 15 millimeters and wheelbase by 30 millimeters to create more space inside. When this reporter, about 164 centimeters (5 feet 4 inches) tall, sat in the back seat, there was more than one hand’s worth of space in both the headroom and legroom.

Despite the upgrades, the car’s driver assistance program was rather disappointing.

Lane keeping assist sometimes worked and sometimes didn’t, especially on roads that were not highways. Even on highways, the car alerted this reporter with beeps when the car moved out of its lane but often did not guide the steering wheel in the opposite direction like other cars would.

While Kia said one of its largest upgrades to the interior was the introduction of a “sound mood lamp,” a lamp attached to the inside of the front doors that pulsates to the beat of music being played inside the vehicle, it wasn’t at all visible in daylight. Also, while the mood light offers different colors and modes, it is only adjustable when the car is parked, making it hard for users to quickly change lights depending on their mood.

The Soul Booster is currently only available in Korea. It will launch in the U.S. market within the first quarter this year, and then in other overseas markets, a spokesperson from Kia said.