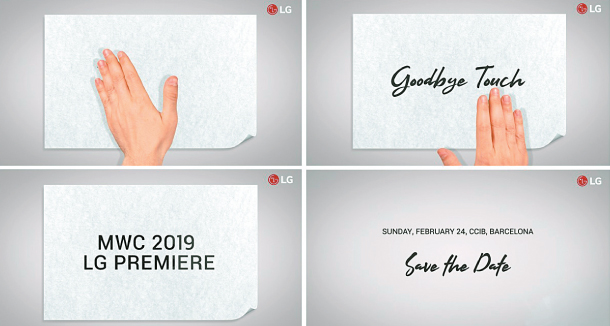 Screen captures of LG Electronics’ media invitation video for the company’s new smartphone to be unveiled on Feb. 24 in Barcelona, Spain. [LG ELECTRONICS]

LG Electronics will unveil a new smartphone at the Mobile World Congress (MWC) 2019 next month.

The company sent out invitations on Wednesday to a media event where it will unveil a new smartphone in Barcelona, Spain, on Feb. 24 - just a day before MWC kicks off. The annual event is the world’s largest exhibition for mobile devices.

Invitations came with a 10-second video that implied the new phone will come with an interface enabling users to remotely control it without touching the screen.

It started with the phrase “Goodbye Touch,” showing the text changing and a paper on the screen moving, seemingly controlled by hand gestures.

Last time LG unveiled a smartphone at MWC was two years ago with the G6.

Although Wednesday’s video didn’t reveal the new phone’s name, local media outlets said it is likely to be the G8 ThinQ, the next model in LG’s G smartphone series.

The phone is rumored to release in March with versions that can connect to 4G LTE and the next-generation 5G network.

The company has not officially revealed details on the product, but industry sources forecast that the new phone may come with five cameras - two on the front and three on the back - like the V40, the latest model in LG’s premium V series lineup.

It also remains to be seen if LG will unveil a “dual display” phone at this year’s MWC as well, a core form factor that the company is hoping will increase its presence in the global smartphone market.

A dual display phone will have two screens attached side by side to open like a wallet.

While IT media outlets reported that the dual display model will be featured at MWC, an LG spokesman said the matter “is not yet decided.”

Having been a relative latecomer to the industry behind other electronics giants like Samsung and Apple in the late 2000s, LG’s smartphone business has been struggling in the red for two years now.

An early success in 5G phones and the dual-display model could be a game changer for the faltering division.

Samsung Electronics is also rumored to be planning to unveil its long-awaited foldable smartphone on Feb. 20, when it will unpack its new Galaxy S10.