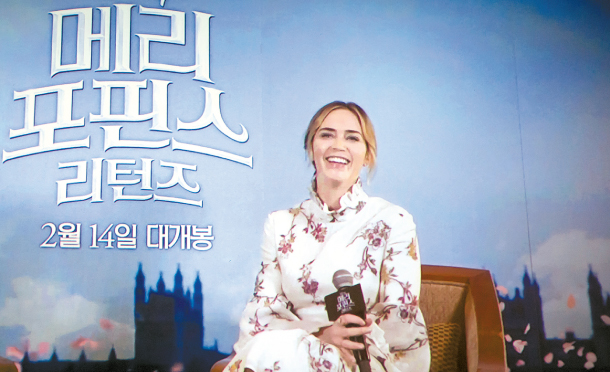 Emily Blunt was never a girly girl or into princesses. Instead, she was fascinated by realistic figures like Mary Poppins, who were attractive for their generosity, humor, and of course, style.

“She has many [good] qualities,” said Blunt during a video conference with Korean press Tuesday. Poppins can be vain and rude, but she is also terribly generous, the actor said of her latest role.

“She comes into people’s lives, infuses magic into their lives, but never expects something in return.” Blunt further described Poppins as magical, yet genuine. “There is something real about her. She’s more like a superhuman than a superhero.”

When Blunt landed the role of Poppins for “Mary Poppins Returns,” the sequel to the 1964 classic “Mary Poppins,” played iconically by Julie Andrews, she was thrilled by the opportunity.

“The fact that I get to play in this fantastic world is wonderful,” said Blunt. “It was a very surreal moment when I first put the full costume on. It was very transporting.”

Of course, playing such a highly-acclaimed character, who was “played so luminously” by Andrews, was intimidating at first. But Blunt, who is known for her roles in “A Quiet Place” (2018) and “The Devil Wears Prada” (2006), tried to bring her own spin to the character by offering something not seen in the original: Poppins’ private moments.

While describing her character as “posh,” “rude” and “vain,” the actor explained she wanted to show a more human side of the character.

Set in mid-1930s London, the film, scheduled for release in Korea on Feb. 14, unfolds as a widowed Michael Banks struggles to raise three children and cover the payments he needs to make on the loans he took out from the bank. If not repaid on time, his home will be repossessed.

Just when help is desperately needed, Poppins descends from the sky and begins to help out as a nanny, introducing the magical world to the children while reminding the grown-ups of the wonderful magic that can happen in life.

“Mary Poppins Returns” has a nostalgic, magical Disney feeling to it, according to Blunt, and she hopes “people embrace that.”

The film is directed by Rob Marshall, and co-stars Lin-Manuel Miranda.