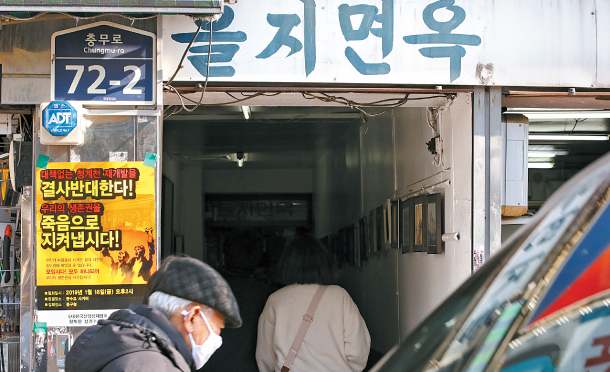 The entrance to the 33-year-old noodle restaurant Eulji Myeonok. [YONHAP]

The Seoul city government took a step back on its controversial plan to redevelop the area around the Sewoon Arcade in Euljiro, central Seoul, announcing on Wednesday that it will review whether to preserve some sections of the neighborhood.

“We will adopt by the end of the year the details of the renovation plan of the area around Sewoon Arcade,” said Kang Maeng-hoon, deputy mayor of urban regeneration for the city government, in a press conference at Seoul City Hall. “The plan will try to preserve traditional markets and old shops in the area.”

The plan to renovate the area dates back to 2006. Then-Mayor Oh Se-hoon announced a plan to demolish Sewoon Arcade and other arcades that were at the center of machine parts production in the city from the 1970s through ’90s. The plan then was to turn the area around the Sewoon Arcade into a 1 kilometer (0.6 mile) long green space, stretching from Jongmyo Shrine to Chungmuro Station, close to Mount Namsan.

The plan involved moving out most of the old shop owners in the area and paying them some compensation.

This plan was altered in 2014 after current Mayor Park Won-soon took office.

The city government decided to keep Sewoon Arcade and other arcades in the area, but upgrade the buildings and connect them with a walkaway that would allow pedestrians to walk from Jongmyo Shrine to the Namsan area.

But renovation work on the rest of the area was to continue. The city government last year announced its plan to allow a construction company to build six skyscrapers in the area, which would host housing, offices and other spaces for cultural and commercial activities.

As the plan was being implemented, some shop owners were asked to move out of the area. Some of them held rallies to oppose the city government’s plan.

The issue became controversial earlier this year. Media outlets focused on an old cold noodle restaurant located in the area, 33-year-old Eulji Myeonok, and other classic Euljiro restaurants like Eulji Dabang, Tongil Jib, Yang Miok and Ansung Jib that were on the brink of being pushed out of the area.

In response to growing public outcry, Seoul Mayor Park Won-soon in a press conference last week said that he will “review the plan to make sure the traditions [of the area] are not lost.”

“I know there are quite a number of those concerned about and critical of the renovation work in the Euljiro area,” Park also wrote on his Facebook account on Sunday. “The areas that hold the history of Seoul and memories of the residents must be preserved.”

Following Park’s announcement, the city government said that it will edit some details to the plan as needed.

“The city government is aware that some of these areas hold valuable assets for individuals, not only in terms of business but also in terms of their memories and life,” the city government said in a statement Wednesday. “Therefore, it will review parts of the plan to see what sections will need to be preserved.”

The city government said that some of the old and beloved restaurants in the area, like Eulji Myeonok and Yang Miok, will be kept as they are.