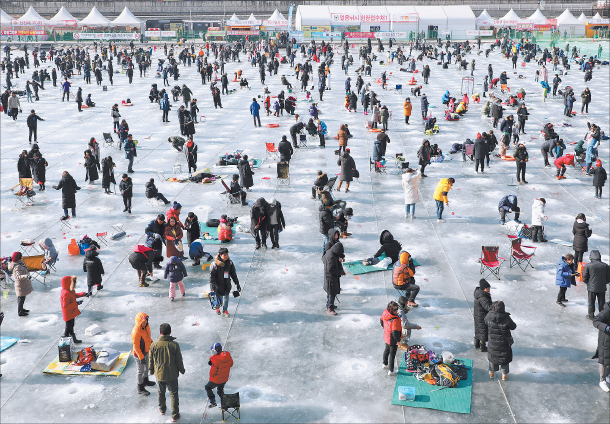 Hundreds of tourists fish for mountain trout on a frozen stream in Hwacheon County, Gangwon, during the Sancheoneo Ice Festival on Wednesday. [NEWS1]

The small county of Hwacheon, Gangwon, is home to the Sancheoneo Ice Festival, one of Korea’s largest festivals. Every winter, the stream surrounding the small town freezes over and hundreds of thousands of tourists fish for mountain trout swimming underneath the ice.

The streets of Hwacheon were decorated with LED direction boards guiding visitors to the fishing sites while balloon models of mountain trout crowded the air. All the decorations were handmade by the residents of the small town.

The festival venue, which covers 2.2 square kilometers (0.85 square miles), were densely packed with people who were either drilling holes or already fishing. The Research Institute for Gangwon announced that this year, the total number of visitors exceeded 1 million on Jan. 13 - three days earlier than last year.

During a visit on Jan. 14, people were crowded near the frozen stream despite it being a Monday. Families gathered around small holes as they tugged on the small fishing lines, hoping for a catch. The tugging is supposed to attract the fish. By actively moving the rod, the fish underwater mistake the bait for live feed and go in for the hook.

Some kids, after urgently pulling on the rod for a while, gave up entirely and looked expectantly at their parents, saying, “I see so many swimming under the hole, [but why can’t I catch one?]”

“Today is my wife’s birthday, which is why we came here to celebrate,” said a man who traveled to the festival from Goyang, Gyeonggi. The air surrounding the area was hazy with fine dust, but this didn’t seem to bother those fishing.

First held in 2003, the Sancheoneo Ice Festival is now one of Korea’s most successful festivals. Every year, the Ministry of Culture, Sports and Tourism recognizes it as such. In 2003, a total of about 220,000 visitors came to the festival, and three years later, the numbers jumped to over one million.

The military provides about 4 billion won ($3.5 million) worth of assistance every year, as Hwaseong has a large military presence. However, the profit that comes from the festival exceeds the budget needed to run it. This year, sponsors like Ottogi provided revenue of 4.6 billion won.

Hwacheon County businesses near the crowds are pleased with the festivals. A resident who owns a restaurant near the festival grounds said that, “unlike usual, [today] the first floor of my restaurant is completely reserved.” The owner added that restaurants see “an increase in regular customers” thanks to the festival.

A strip of new franchises now line along the main street of Hwaseong, proof of the extra revenue the town has received. As of last year, a total of 120 billion won was spent in the county thanks to the 1.73 million people who visited the festival.

“This year, since winter break started late, we are hoping that the number of visitors exceeds two million,” said Song Min-soo, a public relations official at the Hwacheon County government.

Many question what makes this festival so successful, as the area doesn’t have the perfect conditions for success. For starters, the county is far from other neighboring villages, and there’s no train station nearby. There isn’t any special food or crop that represents the area. Like other rural areas, Hwaseong has an elderly population. Despite all of this, the Sancheoneo Ice Festival became a success.

The idea of opening a festival was first bought up in 2002, when then-county Gov. Jeong Jin-cheol realized that many visitors to Hwacheon County came for the quality fishing sites, which were constructed after the construction of the Peace Dam in Hwacheon. After the dam was finished in 2005, the county needed to attracted more visitors to keep the economy going.

According to the county government, about 1,000 people were moving away after the dam was finished. Jeong decided to open an ice fishing festival as a last attempt to drum up revenue for the small town. The targeted amount of visitors for the festival was 200,000.

“I’ll dance if at least 200,000 people show up for the festival,” said Jeong before the festival began.

In order to succeed, county government official’s modeled the festival on other international ice festivals, and other officials promoted the festival at highway rest stops.

Regardless of the explicit preparation, there were still many problems during the first festival. During the first festival, festival organizers distributed local produce, much of which was thrown away by visitors. Illegal vendors also sold overpriced snacks and goods to visitors and there wasn’t enough parking space.

After conducting a survey and determining what the most pressing problems were, the county government got to work.

Instead of providing visitors with local specialties, they handed out vouchers for purchases instead. Reasonably priced restaurants and food stalls run by the government were strategically placed around the festival venue to prevent any other vendors from coming over. They also added more parking.

With every passing year, more and more visitors have come to the Sancheoneo Ice Festival. As of last year, produce sales, which were around the 600 million won mark, jumped to 800 million won. In addition, starting from last year, over 240 hotels, pensions and guesthouses are now offering free night fishing for guests.

“For those who drive all the way over here, we do not demand that they pay a parking fee,” said an official from the county government.

“[Instead of] going to spend time at a ski resort, families could use the same amount of money to enjoy their time here for three to four days,” said an official from the county government.

According to the country government, to arrange a festival that opens in January, the whole county starts preparing in March. In October, the upper region of the Hwacheon stream is blocked to make sure ice forms at the bottom of the stream. Fishing nets are placed alongside the area to make sure the mountain trout do not escape. After the festival is over, the county spends a month restoring stream’s ecosystem to how it originally was.

“We still have a long way to go,” said current Hwacheon Gov. Choi Mun-sun. He went on to explain that the festival organization committee now needs to think of ways to attract foreign guests and make sure that people who come stay nearby.

“In comparison to visitors who enjoy the festival for just that day, foreign guests and families who stay overnight spend more money,” said Choi. “This is why our objective for next year is to increase the number of guests staying in local accommodations from 110,000 to 200,000.”

The governor said that related officials were negotiating closely with foreign travel agencies to include the festival as part of travel packages.