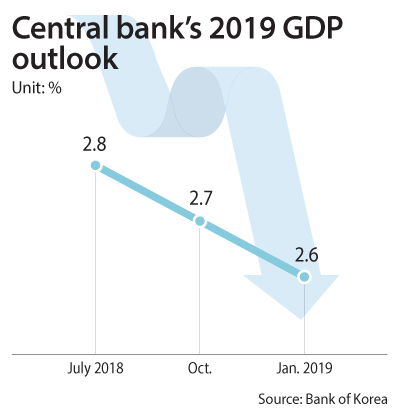 The central bank trimmed its outlook for the Korean economy this year on Thursday as a combination of a slowdown in the global economy, weaker-than-expected exports and trade disputes takes its toll.

The Bank of Korea (BOK) cut its projection for the growth of gross domestic product by 0.1 percentage points from 2.7 percent to 2.6 percent. It estimated 2020’s growth at 2.6 percent.

Increasing uncertainties, especially outside Korea, were cited as the primary factors.

“This year’s growth will stay in line with last year’s,” BOK Gov. Lee Ju-yeol told reporters, “but the external uncertainties facing Korea have increased compared to October, when the BOK revised economic prospect.”

The revision is on par with a projection by Korea Development Institute, a state think tank, while predictions by private research institutes such as Hyundai Research Institute and LG Economic Research Institute remain lower at 2.5 percent.

The International Monetary Fund (IMF) slashed this year’s growth projection for the global economy by 0.2 percentage points to 3.5 percent, the second downgrade in three months. The global lender cited a prolonged trade row between the United States and China as the main factor.

“Risks to global growth tilt to the downside,” the IMF said in a statement. “An escalation of trade tensions beyond those already incorporated in the forecast remains a key source of risk to the outlook.”

On home turf, a slowdown in exports, increasing household debt and a deteriorating jobs situation add to concerns.

Market analysts are keeping a very close watch on the cooling demand for semiconductors, a major engine of Korea’s export-oriented economy.

Against this backdrop, Samsung Electronics announced sharply lower earnings for the fourth quarter, an earnings “shock” that suggested that A “supercycle” in the global semiconductor market was ending.

Meanwhile, the BOK retained its key interest rate at 1.75 percent on Thursday in a widely expected move.

The Bank of Korea described a slowdown in the world economy and the trajectory of interest rises in other economies as factors behind its decision.

BOK Governor Lee brushed off questions over whether the central bank will switch towards rate decreases. “The current state of monetary policy can be considered as accommodative, so we are not at a stage to discuss a rate cut,” Lee said.

Analysts think the BOK will maintain a freeze throughout the year, or possibly a single rate hike.