The SK Hynix logo is displayed on a wall at the company’s campus in Bundang District, Gyeonggi, on Thursday. [YONHAP]

Korea’s No. 2 chipmaker SK Hynix set a new record for annual sales in 2018, but saw profits for the year’s fourth quarter take a steep tumble.

The earnings results announced Thursday backed market projections that the unusually long memory chips boom is coming to an end.

The company explained that it benefited from an “unprecedented up-phase” last year, thanks to the demand surge from data centers and high-performance mobile devices. This was the second year in a row that SK Hynix hit record earnings.

Cha Jin-seok, SK Hynix’s chief financial officer, explained in a conference call Thursday that memory demand in the global IT market slowed between October and December at a pace faster than initial projections. The drop in chip prices was another factor: the average price for DRAM fell 11 percent on quarter while NAND fell 21 percent.

“There were higher uncertainties in the global economy and data centers that led to a memory demand cut down on server investment,” he said. “Demand for high-end smartphones is also declining faster than expected.” 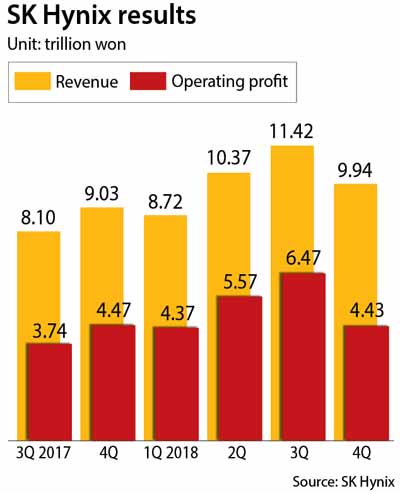 The company’s top marketing executive Kim Seok said during the conference call that major clients for data servers were making conservative purchase decisions to cope with higher uncertainties in the global economy. As DRAM prices rose over the last few years, some clients stockpiled memory chips or found ways to optimize memory with fewer chips.

A temporary factor behind the fourth quarter’s low profitability was the high cost of the completion of two factories - the M15 NAND factory in Cheongju, North Chungcheong, and the foundry plant in Wuxi, China - and labor costs. SK Hynix gave out bonuses equivalent to around 85 percent of annual wages throughout the year, most of which were reflected in fourth quarter results.

In the last two to three years, global chipmakers enjoyed a supercycle that saw demand constantly rise. This bucked the normal trend in the industry where memory demand drops in the year’s first half and rises back up in the second.

The supercycle boosted Korea’s top two chipmakers Samsung Electronics and SK Hynix, both of which reached record profits and kept the country’s exports in the black at a time when traditionally strong industries like shipbuilding were struggling. Experts warned for years that the unusual pattern will soon come to an end, but it wasn’t until recently that cracks started to appear.

Samsung Electronics announced a 28.71 percent year-on-year fall in fourth quarter operating profits earlier this month. The company didn’t reveal details on the performance of different divisions, but it did say in a public announcement that slower chip demand was a core factor.

But local chipmakers say that the end of the supercycle doesn’t mean the industry will no longer be profitable - just that it is returning to a more typical cycle in which revenue rises and falls periodically while gradually improving in the long term.

SK Hynix expects business to improve in the second half to generate around 55 to 60 percent of the year’s entire revenue.

“We expect by this year’s second half data server clients will have used up their stocked chips, and a lot of them are preparing to launch new services throughout the year,” said Kim.

A trend of mobile devices and PCs coming with more memory and a score of new smartphones announced for release this year were also positive factors cited by the company.

SK Hynix also said it will cut down facility investment by 40 percent compared to last year.