JYP opens its doors for a 'Super Intern'

JYP opens its doors for a 'Super Intern' 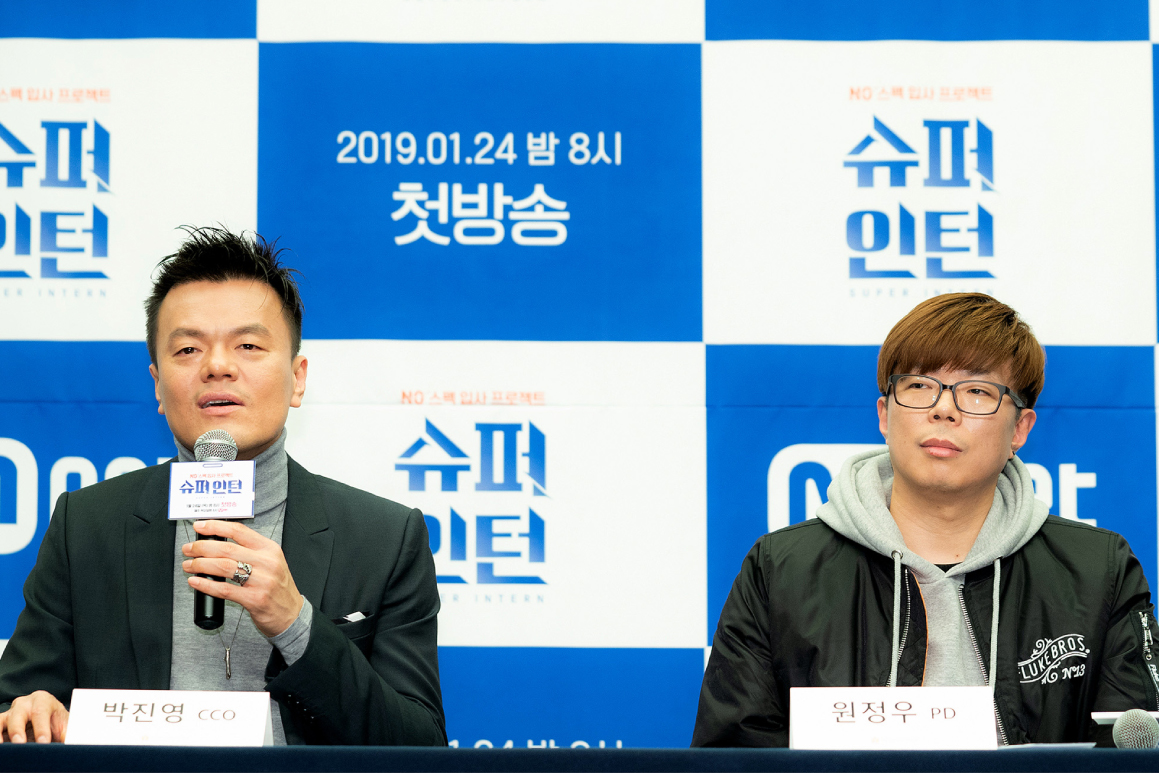 Park Jin-young, the CCO of JYP Entertainment, left, and the director of Mnet’s new reality show “Super intern” attend a press conference held at Stanford Hotel in western Seoul on Thursday to discuss about the new program. In the show, Park assesses job applicants for his company soley based on their passion. [MNET]

As it gets harder for young people get their desired jobs and as unemployment crisis permeates throughout the country, Korea’s major entertainment agency JYP Entertainment has decided to offer a fair opportunity for those with big dreams.

In Mnet’s new series “Super Intern,” which premiered on Thursday evening, the agency takes in job applicants from anyone who has the passion to work in the agency and assesses them not based on their gender, age, academic ability or previous experiences, but only on their will and passion.

Around 6,000 in total have applied in October to November last year, and the Human Resources department chose 400 from the first assessment process. Applicants range from those who were huge fans of idols since years ago and those who had not been able to work due to long maternity leave.

The CCO of the agency, Park Jin-young, then reviews the 400 applications and chooses 100 out of them for the final interview process, which takes place for two days. The 13 finalists will then work as interns at the agency and are given various missions at the worksite. Those who pass the missions and receive high points will finally be fully employed in the agency.

The reason why Park decided to launch this program was to select those who are very creative and truly passionate about music and entertainment.

“I think that the most beautiful thing in the world is the newcomers’ eyes,” said Park during a press conference held on Thursday at Stanford Hotel in western Seoul. “I started out with three people in this agency ? including the current CEO of Big Hit Entertainment. Now, there are around 300 employees. What I realized throughout was that those who are crazy about music and entertainment and have crazy ideas were the ones who [helped the agency to develop.] But now, since there are so many applicants, our recruitment process started to resemble those of other major companies, assessing applicants based on their specs (schools, grades and experiences). And one day, I was afraid that those who are truly talented and passionate in this area are filtered out from the recruitment process, mainly due to their specs. So I came up with the idea of this program.”

According to Park, the whole evaluation process of employees is no different to those of the artists. What is important though, is teamwork.

“Although applicants may not have outstanding talents, what’s important is those who are able to care for others and know how to work in teams. That’s why we gave them team missions [after the finalists have been chosen as interns].”

Park says that he has learnt a lot from even those who have not been selected as finalists.

“I got so many good ideas from almost 300 applicants. It’s amazing to see fresh ideas from [those who are deeply passionate about this work.]”