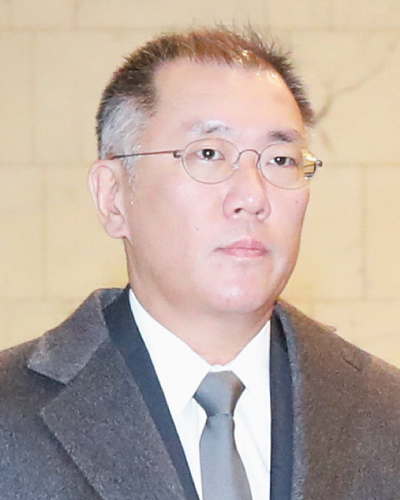 Hyundai Motor Group Executive Vice Chairman Chung Eui-sun was appointed as the co-chair of the Hydrogen Council, a group of business leaders that promotes hydrogen energy, the automaker said Thursday.

In a joint contribution submitted to the World Economic Forum Wednesday, the two said they will emphasize cooperation between governments and companies to boost development in hydrogen-related industries.

The annual forum is currently being held in Davos, Switzerland.

The two highlighted the potential of a hydrogen-based society and economy, in which hydrogen energy would meet 18 percent of the total global energy demand and create over 30 million new jobs by 2050, citing a report by consulting firm McKinsey. The co-chairs said $280 billion of global investment is needed until 2030 to develop a hydrogen-based economy.

The business leaders also emphasized that a hydrogen-based industry cannot be developed by a single country or a company and called for cooperation between public and private sectors. This would include the coordination of regulations and the encouragement of investment.

Hyundai Motor said the council discussed cooperation in the development of a hydrogen-based economy with representatives from the World Economic Forum and the International Energy Agency at Davos on Thursday. The discussions also included a presentation from Korea’s Minister for Trade Kim Hyun-chong on the country’s commitment to developing hydrogen energy.

Established in early 2017 at the World Economic Forum, the Hydrogen Council has 33 core member companies, such BMW and Toyota, and gas companies, such as Korea Gas Corporation.