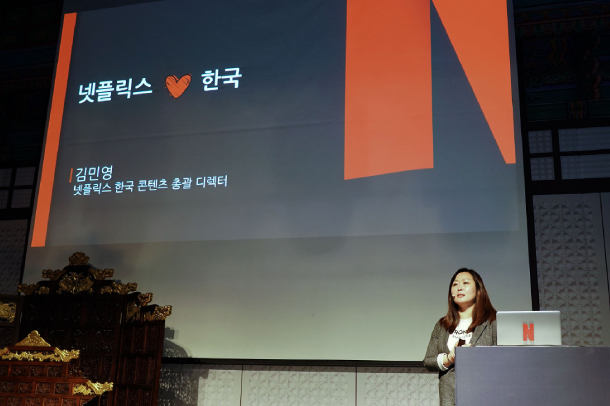 Kim Min-young, content director of Netflix in Korea, speaks at the streaming platform’s media event held at the Plaza Hotel in central Seoul on Thursday. [NETFLIX]

Ahead of the launch of Netflix’s first original Korean drama series today, executives from the streaming giant expressed confidence in the global popularity of Korean content at a press briefing in Seoul, Thursday.

Kim Min-young, the director of content at Netflix in Korea, said that she expected to win over fans with the company’s first-ever original Korean drama series “Kingdom,” a highly-anticipated zombie series that launches on the streaming platform today.

“‘Kingdom’ will launch in 190 countries in 27 languages at the same time, with dubbing provided in 12 different languages,” Kim said.

“We expect many users will want to watch it, as it can appeal to both people who like zombie thrillers or just Korean content … I believe in our creators and [the popularity] of Korean media, which is also the reason why Netflix launched Korea’s own content team in the country last year.”

Before last May, the team that produced and licensed content to Netflix for the Korean market worked from Singapore at the company’s Asia-Pacific headquarters. Following the relocation, the Korean content team has been pursuing licensing and production activities more actively, working with domestic content producers like JTBC and Studio Dragon.

Regarding original production in Korea, Kim said she benchmarks successful foreign Netflix original dramas like Spanish title “Elite” and Turkey’s “The Protector” that became huge hits with users across the world.

“Our ultimate goal is to present entertainment to consumers, and from our experience, we found it necessary to give creators the freedom to tell the story they want to share,” said Kim.

“As you can see with ‘Black Mirror: Bandersnatch,’ we will help producers to not be hindered from doing what they want because of technological limits.”

“Black Mirror: Bandersnatch” is a choose-your-own-adventure film by Netflix that allows users to choose one of many action courses for the characters throughout the movie to determine how the plot progresses. Kim hinted that the impressive technological feats as shown via the interactive video could also be made possible in Netflix’s Korean programs.

“We were also satisfied with the performance of our original entertainment program ‘Busted!,’ as reflected by our decision to produce a second season,” she said.

“Although we can’t provide all content available out there, we conduct analyses to discover what content users want,” Kim said. “But we have contents like ‘Friends,’ ‘Walking Dead’ and ‘Kim’s Convenience’ which users can’t access elsewhere.”

In response to a rumored nine-to-one profit division between Netflix and Korean distributors like IPTV operator LG U+, Nigel Baptiste, director of partner engagement at Netflix, said that he could not “go into the specifics of what the deals are with our partners,” but the goal was to help “everyone in the ecosystem benefit.”

The team did reassure users that subscription fees will not rise anytime soon in Korea.

“We did increase prices in the U.S. … but we don’t have plans to do so right now [in Korea],” said the vice president of Asia-Pacific communications, Jessica Lee.

Netflix is planning to release several new series in Korea this year - the first seasons of “Love Alarm,” “My First First Love,” “School Nurse Ahn Eun Young” and the second season of “Busted!”