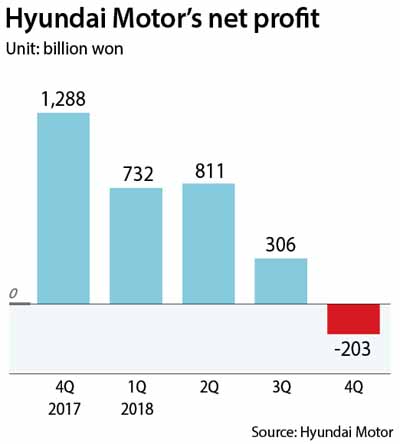 Hyundai Motor swung to a net loss in the fourth quarter last year, largely due to the strength of the won over the U.S. dollar and weak global sales.

It is the worst quarterly earnings reported since 2010, when the company first started posting earnings based on the International Financial Reporting Standards.

Korea’s No. 1 automaker by sales on Thursday posted a net loss of 203.3 billion won ($180 million) for the quarter that ended December, a considerable drop from the 1.29 trillion won net profit inked a year earlier.

The company cited weak earnings from its affiliated locomotive maker Hyundai Rotem, unfavorable currency rates and the sluggish growth of the global automotive industry as major reasons that pulled down earnings in the fourth quarter.

It added that the cost of its investment into developing futuristic cars was also reflected.

Hyundai already surprised investors when it posted 306 billion won in net profit in the third quarter, a 67.4 percent year-on-year drop. At the time, the company blamed one-off costs of airbags, engine quality control and marketing activities as well as currency rates to explain its losses and said the fourth quarter would be a better quarter.

Choi Byung-chul, chief financial officer at Hyundai Motor, however, said the automaker was able to ramp up automotive sales in the fourth quarter thanks to newly-released SUVs and that the company’s performance could bounce back with several new car launches scheduled this year.

According to the earnings report, revenue from the automotive business increased by 9.3 percent on year to 20,399 billion won in the fourth quarter. Operating income also jumped up 556.7 percent year on year to 463 billion won for automotives.

The most recently launched Palisade SUV has been well received by Korean consumers after its launch last month, and a Hyundai Motor spokesperson said it is considering expanding production of the SUV in accordance with the demand. The carmaker has taken orders for 30,000 Palisades so far, according to Koo Za-yong, head of investor relations at Hyundai Motor.

“Growth of the global automotive market is expected to slow down, but we will strengthen our brand competitiveness by launching cars in segments [that Hyundai had little presence in],” said Koo during a conference call with analysts on Thursday.

Highly anticipated Hyundai cars this year include a new Sonata sedan and a premium SUV GV80 branded under Genesis.

Hyundai plans to sell a total of 4.68 million cars this year by selling 712,000 units domestically and 3.97 million units abroad. Last year, the company sold 4.59 million cars at home and abroad, a 1.8 percent increase year on year.

The automaker commented on its governance reform plans during the conference call as well. It plans to complete reforms this year to break the cross-shareholding structure between affiliates and improve shareholder returns. Last year, its attempt to reform its governance structure failed after facing a series of complaints from U.S. activist hedge fund Elliott Management.