President of Yonsei believes the paradigms are a changin’

President of Yonsei believes the paradigms are a changin’ 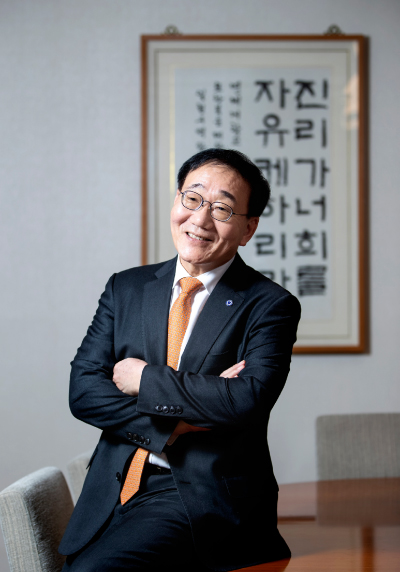 Kim Yong-hak, president of Yonsei University, is an authority on social network theory: how knowledge and information move through networks. Song Ho-keun, the dean of Postech’s humanities and social sciences department, says Kim is a “veteran who draws macroscopic theories from microscopic observations.” He is pioneering new ideas of how we will live in a society in which the fourth industrial revolution will transform our way of life.

The JoongAng Ilbo interviewed Kim in his office and he spoke at length about the changes in paradigms on our horizon and how they relate to higher education. Below are edited excerpts of our conversation.

Q. You took office in February 2016, making you president of Yonsei University for four years. Tell us about your work.

A. I am drawing the big picture of colleges in the future. I call the fourth industrial revolution a fourth civilization revolution. The revolution is not confined to industry but is a mega trend across the civilization as a whole. Our freshmen this year will live until 2100. Although a time may come when artificial intelligence (AI) replaces humans in the future, people do not have to fear AI if they are equipped with creativity.

How should the educational system be changed?

We need to change our direction at a 0.5 degree angle. A Nobel Memorial Prize winner in economics, James Heckman, said, “Cognitive skills prized by the American educational establishment and measured by achievement tests are only part of what is required for success in life. Character skills are equally important determinants of wages, education, health and many other significant aspects of flourishing lives.” At first, intelligent people succeed, but ultimately those with warm hearts succeed. “Extelligence” wins over intelligence. The networking of ideas — connecting smart ideas and producing value out of them — is ex-telligence.

What is the essence of extelligence?

People with extelligence learn actively and solve problems effectively. The students need to get out of the classroom — run out of the classroom! Let’s look at the social problem of senior citizens living alone. Students worried about the elderly who suffer during frigid winters and invented a single-serve tent. Sleeping inside the tent raises the temperature from four to five degrees Celsius (41 degrees Fahrenheit). This is the networking of ideas.

Presidents of rival universities are replaced by engineering scholars who are well aware of technology.

(Smiling) I need to tense up more. We need to design a new paradigm for education, but problems regarding tuition, part-time instructors and college admissions are all overlapping, so it is difficult to achieve our goal. The presidents know all this very well. We are ahead in digitalization. For the first time in the world, each college — engineering, music, domestic science, medicine and dental medicine — started a 5G test bed research based on a 5G network. Virtual reality, mixed reality and HoloLens content will be the new education model.

As a sociologist, you advised to make a “raft” when starting a business.

The young generation these days is more intelligent and superior in competence than the older generation. However, the socioeconomic structure is not able to embrace them. In the past, graduates just had to wait for a big passenger ship that would take thousands of people, namely a large company. It’s not like that anymore. The ship has become smaller and does not come quite so often. Students have to make a raft on their own and sail. That is the theory of a raft in starting a new business.

Could students sail the wild sea with a raft?

In a civilized society, each person has to make a raft. There is no need to fear failure. Failure and challenges are prerogatives of the youth. I established a Y-valley, a noisy library, in the central library three years ago. It is as large as 700 pyeong (2,314 square meters). The library welcomes anyone who have experienced failure and allows them to learn through debate. Life is learnt through failure. Starting a business is learning by oneself. It is taking risks. The biggest enemy is the parents. Rather than opposing, what is necessary for the parents to do is to wait and see.

Yonsei University is lagging behind other top global universities.

The reason is clear. Our capacity for research is lacking. Yonsei University raised its research resettlement funds to 15 million won ($12,280) for new professors in the natural sciences and engineering field, and to 30 million won for those in humanities. By recruiting professors anytime, it scouts the top 5 percent of professors in research ability.

Not only the atmosphere, but also the research expenses are problematic.

Actually, it costs a lot. We cannot even dream of a university like MIT, which invests 1 trillion won on establishing an AI college. We do not have even 10 billion won worth of research. Even though a world-renowned professor is one of our alumni, we cannot bring the professor to our school. The professor would rather go to a place that offers 10 times more than us.

Financial issues have come up. The Ministry of Education has been related to the tuition problem through government projects, scholarships and laws regarding part-time lecturers.

I feel burdened. The tuition issue has been politicized for ten years. I do not know what kind of politician could change this.

You have been stressing a sharing paradigm between universities.

You need to cooperate with the Ministry of Education at the right time.

The government and the university have to evolve together. Coevolution is the key. Systems oriented on regulation should be changed.

What are the specific ways to coevolve?

It is desirable to form a consultative group between the government and the university. Coevolution among the Ministry of Education, the university and industry should be made. The future depends on that.

Yonsei University is in the so-called SKY league, an acronym for the top three universities in Korea (Seoul National University, Korea University and Yonsei). Isn’t it better to break the league or strengthen it and elevate competence?

If we wanted to do so, it costs a lot of money. We need to make several groups step by step.

People long to be in the “SKY Castle,” as the new television series is called, and that could deepen competition to go to college.

Competition among students to go to the best universities will not last long. The methods to enter colleges have become diversified, and the competition less fierce. The number of students is sharply declining, which means it is relatively easier to enter college than before, so the social value of the diploma has diminished. Rather than the reputation of the school, a student’s abilities are more important.

We will continue doing it. It is wrong to blame the written exam as the main culprit in the admissions process. The college entrance exam is the main culprit. Just because you go to cram schools does not mean your written exam score goes up. When will we stop pursuing education that teaches students to select only one right answer?