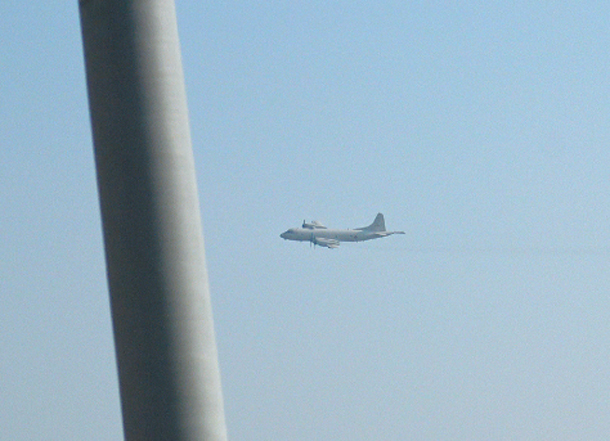 A Japanese P-3C plane flies by at an altitude of around 60 meters (196 feet) above water near a Korean destroyer Wednesday. [YONHAP]

Korea’s Defense Ministry on Thursday released five photos of a low-altitude flyby by a Japanese patrol plane near a Korean warship a day earlier, an act which its spokesman called “a clear provocation” of Seoul.

According to Seoul’s Joint Chiefs of Staff, a Japanese P-3C maritime surveillance aircraft flew at an altitude of 60 to 70 meters (196 to 229 feet) above the water past South Korea’s Daejoyoung destroyer only 540 meters away in international waters off the southwestern coast of the peninsula.

Based on intelligence released by the Korean military, this is the third such flyby by Japanese planes this month, with previous cases occurring off the coast of Ulsan on Jan. 18 and off the coast of Jeju Island on Tuesday.

In all three incidents, the planes buzzed by at an altitude of 60 to 70 meters or less.

“The fact that [Japan] conducted a close-range, threatening flyby despite our repeated requests to the Japanese government to prevent repetitions of such acts constitutes a clear provocation,” said Suh Wook, chief director of operations at Korea’s Joint Chiefs of Staff. “We cannot but doubt Japan’s intentions and strongly condemn the act.”

Suh added that if such acts continue, Korea’s armed forces would react according to its military protocol - an implication that an aggressive response could lie in store in the event of a recurrence.

Korea’s Foreign Minister Kang Kyung-wha also expressed regret over the incident on Wednesday to her Japanese counterpart Taro Kono on the sidelines of the World Economic Forum in Switzerland. The Japanese government, however, flatly denied the accusation. In response to Seoul’s announcement on Wednesday, Defense Minister Takeshi Iwaya argued the plane had flown above a 150 meter altitude “in accordance with international law as usual.”

But adding fuel to the controversy is that the plane flew in patterns commonly regarded as highly threatening by air forces. According to Korean military intelligence, the plane approached the Daejoyoung from its rear and flew alongside the ship from its starboard side before finally making a circle above the ship’s bow and flying off.

Flying alongside a military ship is generally regarded as preparation for a missile strike - verboten in international military protocol during peacetime.

Seoul was originally mulling release of video footage of the maneuver filmed with a handheld camcorder on the Korean warship, but resolved to “act with restraint” by holding back the video footage for now. This newest irritant to Korea-Japan relations comes just over a month after Tokyo lodged complaints with Seoul over a Korean destroyer’s alleged locking-on of its fire-control radar on a Japanese patrol plane over international waters in the East Sea last Dec. 20.

Seoul said it was, in fact, the Japanese P-1 plane that had posed a threat to its Gwanggaeto the Great warship by flying at a 150 meter altitude, based on footage released by the Japanese Defense Ministry.

In talks held between the two countries in Singapore on Jan. 14 to resolve the spat over the radar, Tokyo’s delegates insisted that 150 meters was the international minimum standard for a low-altitude flyby and argued that its plane’s actions on Dec. 20 were not in the wrong.

This month’s flybys, however, seem to violate the very benchmark set by Japan’s own negotiators.

Some defense analysts in Seoul say the recent flybys are deliberate actions on Tokyo’s part to protest the radar dispute, about which it said it would no longer consult Seoul. Others have said Japan is trying to deflect attention from the radar dispute altogether by building a new row since it does not appear to have further evidence to back up its claims on the issue.