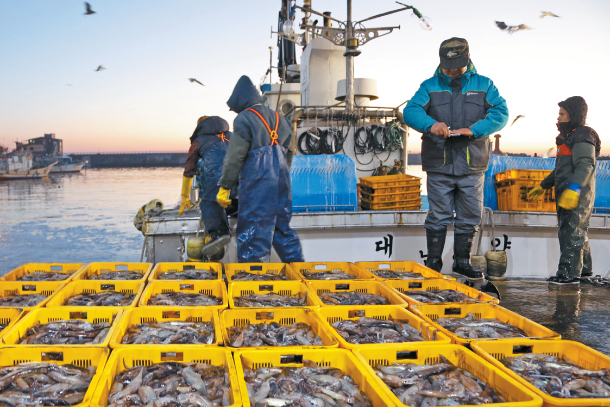 Fishermen sell squid at Namae Harbor in Yangyang County, Gangwon, on Jan. 18. With an uptick in the squid catch in the East Sea this year, fishermen are expecting that the local economy will turn around. [YONHAP]

Fishermen in the coastal city believe that the regional economy will get a boost due to this month’s big squid hauls from the East Sea.

According to the Gangwon East Sea Rim Headquarters on Monday, 743 tons of squid were caught in the East Sea from Jan. 2 to 15, four times more than the same period a year ago.

The squid population in the East Sea has decreased rapidly over the past few years, giving them the name “golden squid” for its scarcity. Due to a recent bountiful catch, however, prices are falling. The price of 20 strings of squid has fallen below 40,000 won ($35), which is much cheaper than last year, when the same number of squid cost 64,000 won.

The Gangwon East Sea Rim Headquarters believes that the deluge of squid is caused by a decrease of cold currents coming from North Korea. The temperature of the East Sea rim rose up to 17 degrees Celsius (62.6 degrees Fahrenheit), causing squid to gather in the area.

“It didn’t help that we put out our boats for sale,” said one fisherman. “Nobody would buy it because these boats are made for catching squid. It was useless because there were no squid out in the sea.”

Boats were seen tied up in the shore last year, even during the busy season, since the fishermen couldn’t afford to sail. In order for fishing ships that weigh less than 10 tons to sail, a boat needs at least four people, including a captain. The boat then needs to catch at least 2,000 squid a day in order to afford the cost of labor and gas. However, due to the low number of squid in the East Sea last year, many fishermen had no choice but to give up.

Local residents also faced difficulties in their business. Because of the low squid catch from the East Sea, restaurants that specialize in mulhoe (Korean raw fish) near Sokcho were importing squid from the west coast with more expensive prices.

The Jumunjin Squid Catching Festival in Gangneung, Gangwon, which took place last October, also faced problems due to the lack of squid in the area.

Now things are turning around for those who depend on the East Sea’s squid.

“It’s been a while since we’ve seen such success. It’s been hard on everyone over the past few years,” said 66-year-old fisherman Lee Deol-ahm. “We catch at least 4,000 to 6,000 squid per boat in a single day. At this rate, we expect there will be a dramatic revitalization of the local economy.”

An official from the Gangwon East Sea Rim Headquarters said, “We are hoping that the recent recovery of squid continues, at least enough for the local economy to be revived.”