The Korean government said Friday it will launch a special probe team to look into sexual assault and other human rights violations in the country’s sports community, following a series of claims by athletes that they were assaulted by their coaches.

The “Me Too” movement in the sports community has been the hottest issue in recent weeks, after Olympic short track skating champion Shim Suk-hee alleged that she was raped by her former coach, Cho Jae-beom, who has already been indicted for beating up other athletes.

Do said the special probe team will be led by the National Human Rights Commission of Korea and will conduct full-scale inspections to find any wrongdoing in sports. 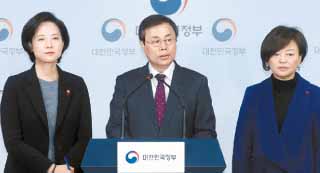 Based on the investigation result, the sports ministry said it will overhaul its policies.

The ministry said it will mandate that perpetrators be suspended from their duties and must stay away from the victims. The government will also revise the law to punish sports officials who conceal sex crimes in their organizations with jail sentences.

In addition, the ministry will establish a database and registration system for all coaches who instruct student athletes in the country.
The ministry said it will also launch a committee to improve Korea’s elite athlete sports culture.

For balanced growth of elite sports and recreational sports, the government will review a plan of separating the national Olympic body. The Korean Sport & Olympic Committee (KSOC) currently manages both elite and daily sports administrations.

“As the sports minister, I want to apologize to athletes, their families and people in Korea for not preventing such incidents,” Do said. “To clean up repeated corruption in sports, we need to escape from a winning-at-all-costs philosophy.”

Do said the government will try to shift the paradigm in national sports.

“The value of sports should put emphasis on hard work, fair competition, respecting opponents and building a healthy society for all instead of national pride,” he said.