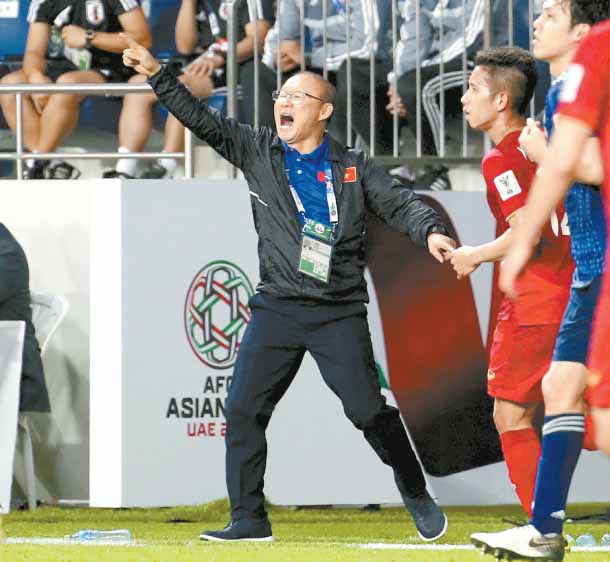 Korean football coach Park Hang-seo’s continental tournament journey with Vietnam has come to an end in the quarterfinals, but he can hold his head high.

Vietnam lost 1-0 to Japan in their quarterfinal match at the Asian Football Confederation (AFC) Asian Cup at Al Maktoum Stadium in Dubai, the United Arab Emirates, on Thursday. Park’s side were heavy underdogs, but their performance was enough to harass four-time continental champions Japan.

Vietnam’s only flaw was giving up a penalty following a video assistant referee (VAR) review.

Still, the quarterfinals exit is an overachievement for Park and Vietnam.

Vietnam’s best Asian Cup result is a fourth-place finish, accomplished in 1956 and 1960, but that’s when the tournament had only four teams.

In their third Asian Cup appearance in 2007, Vietnam reached the quarterfinals but lost to Iraq 2-0. At the time, the tournament featured 16 teams, and the top two nations from each group advanced to the last eight.

But Vietnam’s 2019 Asian Cup performance with Park is considered more meaningful. Starting with this edition, the number of participating teams expanded from 16 to 24, and the tournament added the round of 16 stage.

At that point, Park’s Vietnam already achieved their goal, but apparently they weren’t satisfied. In the round of 16, Park’s side edged Jordan, the Group B winners, on penalties and joined the last eight.

It was the first time in Vietnam’s football history to get past the first knockout round at the Asian Cup. Vietnam were the only Southeast Asian team in the quarterfinals this year.

With the latest result, Park continued his miracle run with Vietnam since he took over the team in 2017.

Park already earned a national hero status in Vietnam after leading the country to a runner-up finish at the AFC U-23 Championship last year. He then guided Vietnam to the semifinals at the 18th Asian Games in Indonesia, the country’s best-ever performance at the Asian Games.

In December, Park made another prolific result with Vietnam by winning the Asean Football Federation (AFF) Suzuki Cup for the first time in 10 years.

The 60-year-old was previously best known for serving as an assistant to Guus Hiddink’s Korea national team that reached the 2002 FIFA World Cup semifinals, but now there is no doubt that he will be remembered as one of the most successful football coaches, if not the best, for Vietnam.

After his team’s hard-fought loss to Japan, Park said he did wish for a miracle but was still satisfied with his players’ fighting spirit at the tournament.

“Through this tournament, we earned confidence that we can achieve something,” he said. “It’s still difficult for Vietnam to compete against top-class Asian teams, but it’s a good thing that we learned how to play against those teams.”

With Vietnam no longer in the competition, Park is now rooting for his home country Korea. The Taeguk Warriors will take on Qatar in the quarterfinals later Friday.

“I hope my home country can win the Asian Cup,” he said.