LEE DONG-HYEON
The author is a deputy industrial team editor of the JoongAng Ilbo. 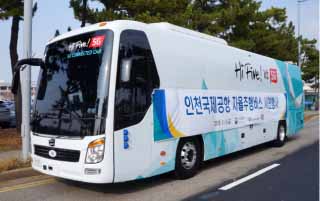 People got onboard, the door closed and the bus started to move. It moved for just a few meters and then made a sudden stop.

A honk was heard.

A man who seemed to be a worker looked surprised. The man, who had a broom and a dustpan, stared at the bus for a few seconds and moved to the side. As the bus moved again, he threw the broom and yelled. He seemed to be angry.

The shuttle operated around the exhibition halls at Paris Expo in Porte de Versailles. It had a large liquid crystal display panel and no driver.

The autonomous car detects obstacles in front of it. It stops and sends a signal as programmed. The man who was cleaning was startled as the bus honked suddenly. He looked into the bus, but there was no one in the driver’s seat. “I would have been angry, too,” said a reporter from England who was smoking next to me.

The Autonom bus can’t express feelings. It operates as designed, detecting the size and type of the obstacle to make a stop. It is the humans that apply feelings to the movement of emotionless machines.

Autonomous vehicles do not have will or emotions. They have cameras and video processing programs. They have radars to detect obstacles and lasers to determine the volume of the obstacle.

Utilizing big data, autonomous driving has become more precise. The entry barrier is both lower than I thought and higher than I expected.

While the technology could become a practical reality soon, I think it is unlikely for most readers to go home sleeping or reading in their cars in their lifetime.

If the autonomous bus did not consider, or was not programed to consider, a cleaner as an “obstacle,” it would have said, “Thank you for your service. Please move aside for a moment.”

What’s frightening is not the machine but the people who consider the cleaner as an “obstacle,” or forgot that he was a human.

That’s where the problem always begins.