In search of the origin of Korea’s fine dust

In search of the origin of Korea’s fine dust 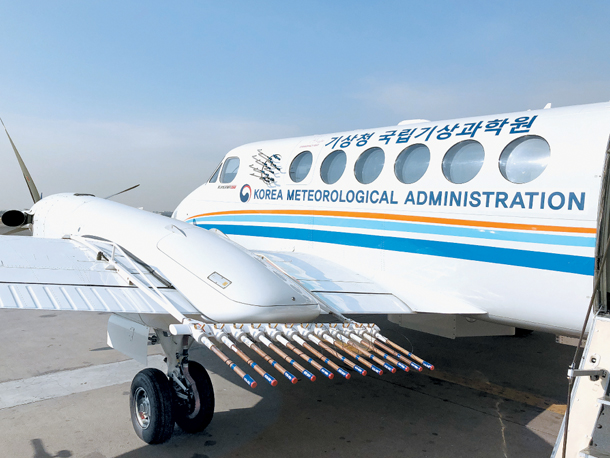 South Korea conducted an artificial rain experiment over the Yellow Sea on Friday to analyze the effect on reducing fine dust pollution. An airplane owned by the Korea Meteorological Administration, photographed Thursday, dispersed silver iodide, a chemical that increases precipitation by collecting water vapor, into the clouds. [YONHAP]

When the Chinese government announced that it was cleaning up industrial regions throughout the country to curb pollution a few years ago, some questioned where the dirty factories would go.

Media outlets in Korea raised the possibility that a lot might move to the coastlines to minimize air pollution in Beijing.

To find out for ourselves, a team of reporters from the JoongAng llbo recently flew to Shandong Province, a coastal province across the West Sea from South Korea to check out the state of industry — and the air.

When the team arrived in Qingdao, Shandong Province, on Nov. 28, the city was enveloped in thick smog. The sun was high in the sky, but its outline was unclear in the murky air.

“Qingdao has been covered in smog for two days,” a local guide told us. “We have had smoggy days once or twice during the winter season before, but rarely as bad as today.”

Driving south from Qingdao, we arrived at the Qingdao Special Steel Factory located on the coastline near Dongjiakou Port. “The factory began running in November 2015,” our guide said. “It produces about 400,000 tons of steel every year.”

We traveled south toward Rizhao, a city in which the Shandong Steel Factory opened recently. “The factory moved from Jinan, Shandong Province, in 2017,” the guide said. “When it moved, it expanded in size as well.”

Within Shandong, Jinan is located more inland. Here was one factory that had moved closer to the coastline — and closer to Korea. 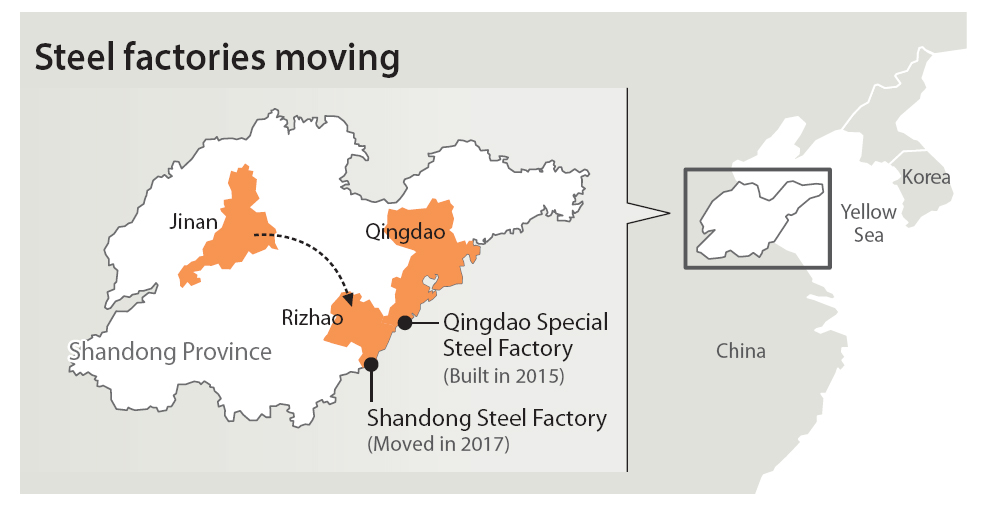 Experts in China told the team that the phenomenon would not be commonly found in the country given nationwide regulations to combat pollution.

“The allegation that factories were moved [to coastal regions] cannot be true because each provincial government is assessed on their air quality improvement — there is no reason to accept additional factories or plants into the region,” said Xie Hongxing, director of Clean Air Alliance of China. “The government began to implement policies to fight air pollution from 2013 and these policies were implemented not only in Beijing and Tianjin in Hebei Province but throughout the country, including the provinces of Shandong, Shanxi and Henan.

“In Shandong, actually,” he added, “the air quality improved over the past five years.”

“Due to the boost in economic activities in the eastern coastal region, residents in the area have become quite sensitive to the air quality issue — they don’t want more polluting facilities near where they live and work,” an employee of the Chinese Academy of Sciences told the JoongAng Ilbo on the condition of anonymity. “Actually, a lot of these facilities have moved west from the eastern coast.”

Huang Wei, a public awareness coordinator at Greenpeace East Asia, also ruled out the possibility of factories moving to Shandong, one of the provinces closest to South Korea.

“It’s true that the crackdown in Beijing and throughout Hebei Province was heightened last year, but so was the crackdown in surrounding areas like the provinces of Shanxi, Henan and Shandong,” she said. “The likelihood of factories moving to Shandong is very low because it is a heavily regulated region.”

A significant amount of data contradicts the hypothesis that the Chinese government may have moved plants and factories closer to coastal provinces to reduce pollution in the Beijing area.

According to the Shandong provincial government, its level of PM2.5 fine-dust particles declined by 13.6 percent from 2016 to 2017, reaching an annual average of 57 micrograms per cubic meter of air in 2017. The annual average in Beijing was 58 micrograms that year.

The Chinese government’s data was corroborated by some studies in South Korea.

“The data collected from satellite images tell us that the level of nitrogen oxide and sulfur dioxide has decreased throughout China from 2012 to 2016,” wrote Kim Soon-tae, professor of environmental science at Ajou University in Suwon, Gyeonggi, in a recent paper with his colleagues. “But we do not have data on how much of the pollutants came from emissions, so we cannot be sure how much of the air quality improvement is from the government crackdown or from other factors like changes in the climate.”

If any factories or plants were moved to escape heightened regulations on emissions, they were moved inland, further away from South Korea, some experts said.

“Some factories have been moved to regions inland where regulations on emissions are less strict,” Huang said.

As if to corroborate this, the air quality in some inland regions of China has worsened recently.

The annual average PM2.5 level in Hubei Province, located southwest of Shandong, rose about 20 percent from 2016 to 2017, reaching an annual average of 72 micrograms in 2017, according to a South China Morning Post report last February. The report questioned whether some factories had moved to the region from more northern provinces, where the crackdown on emissions was stronger.

Although the team could not find much on the ground nor in the data to back up the suspicion that the Chinese government moved factories to coastal areas, it was still evident in some data that China’s struggle with air pollution remained a tough one.

And some of its emissions do end up flying into Korea.

A joint study between the South Korean Ministry of Environment’s National Institute of Environmental Research (NIER) and NASA conducted in May and June 2016 said that 52 percent of the air pollutants in the country were found to have been produced locally, while 48 percent were attributed to external factors — and 34 percent were from China.

The JoongAng Ilbo reported exclusively this month that rises and falls in the Air Quality Index (AQI) in China were mirrored in the levels of PM2.5 in the atmosphere over Korea from Jan. 9 to 15, which included the weekend that many locals remember as particularly smoggy.

Many locals petitioned the Blue House to reach specific agreements with the Chinese government about the issue.

At the First Steering Committee of the China-Korea Environmental Cooperation held in central Seoul from Tuesday to Wednesday, officials from the Chinese and Korean governments agreed to pool government data on fine dust to establish a joint warning system on fine dust levels across both countries.

The South Korean Ministry of Environment announced that more bilateral cooperation on curbing air pollution will be discussed in subsequent bilateral meetings next month.

To tackle air pollutants being produced locally, South Korean President Moon Jae-in in a cabinet meeting Tuesday ordered respective bureaus to draft policies that would place “the fine dust issue on the same level as a natural disaster.”

One agreement reached immediately by the central government and local governments was to issue joint emergency reduction measures in all provinces when the fine-dust level reaches unhealthy levels. The measures include banning half of public officials’ cars from roads and reducing operations at public coal power plants.

Following this agreement, 51 factories and plants run by corporations throughout Korea — which produce about 17 percent of fine-dust particles in the country, according to the Environment Ministry, out of the total of 336,066 tons every year — entered into an agreement with the ministry on Thursday to minimize operations on heavily polluted days.

The agreement was reached voluntarily.

But more privately-run plants will be bound by law to minimize operations during smoggy days when a special law on fine dust reduction is passed on Feb. 15. A total of 101 corporations will be required to abide by the law.

“I think it’s great that we are running the regulation a little earlier through voluntary participation by some companies,” said Shin Geon-il, head of the air quality management bureau of the ministry. “Hopefully this will set a positive precedent for other companies to follow.”