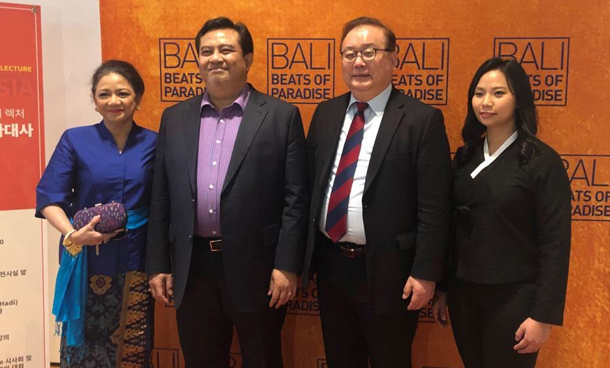 From right, Indonesian director and producer Livi Zheng, Director of the National Museum of Korean Contemporary History Chu Chin-oh, Indonesian Ambassador to Korea Umar Hadi and his wife Nila Umar Hadi at the premiere of documentary “Bali: Beats of Paradise” at the museum in central Seoul on Thursday. [EMBASSY OF INDONESIA IN KOREA]

The Indonesian Embassy in Seoul hosted the Korean premiere of documentary “Bali: Beats of Paradise” on Thursday, which focuses on Indonesian gamelan music.

The documentary, directed by Livi Zheng and featuring Grammy-wining singer Judith Hill and acclaimed composer and Balinese dancer and musician Nyoman Wenten, explores gamelan and its fusion with other music genres like funk. It premiered in Beverly Hills, California, in November last year. The embassy is hoping to have the film hit theaters here in March.

The premiere hosted by the Indonesian Embassy and the National Museum of Korean Contemporary History at the museum on Thursday was attended by dozens of artists, producers and scholars, as well as groups of parents with young children. The museum regularly hosts programs with ambassadors to Korea.

Zheng spoke with the audience about the beginnings of the documentary. “It started with a concert [on gamelan music] in Los Angeles, where I had filmed a dancer and made a little video about it,” she said. “There was a positive reaction among Americans and Indonesians alike at the time and I came to learn that gamelan came out in movies ‘Avatar,’ ‘Star Trek’ and many others. I felt then that if I don’t make a feature film, I would regret it for the rest of my life.”

Gamelan is the traditional orchestral music of Indonesia, mostly made up of percussion-based instruments including metallophones and drums.

Hill, looking for a unique collaboration with musicians from a different genre, and Balinese dancer and musician Wenten, looking to preserve gamelan music, came together under Zheng’s project. They created a music video mixing funk with gamelan.

The music video, “Queen of the Hill,” was released in September 2018. Since then, it has received more than one million views on YouTube.

The documentary not only details the process of mixing gamelan with funk music, but explores, through the eyes and personal experiences of Wenten, the history of gamelan and what it means to Indonesians.

In Korea, the place to learn about the music is the Indonesian Embassy, which hosts gamelan classes every Saturday. “We have a plan to bring the film to Korea, in March or April, and when that happens, we will also bring gamelan music to the public,” said Indonesian Ambassador to Korea Umar Hadi. “But in the meantime, if you would like to listen, just drop by the embassy on a Saturday.”

Hadi, who is also the executive producer of the documentary, said he hopes to see additional collaboration between Korean and Indonesian artists and producers.

“I really want to see Livi Zheng collaborate with Korean artists,” he said. “I am sure they will create something very, very beautiful.”