Qatar sent Korea packing with a 1-0 victory at Zayed Sports City Stadium in Abu Dhabi, the United Arab Emirates (UAE). Korea entered the match ranked 40 spots above Qatar in the world at No. 53, but the position meant nothing as the offense that had been lackluster all tournament long failed to bounce back.

“I think the opponents played a more efficient match than we did,” he said. “In the first half, we weren’t able to have quick buildups. We were too slow with changing directions of our attacks. It’s disappointing that we couldn’t make quick passes in the first half, though we didn’t give up counterattack opportunities and responded well to some mistakes early on.” 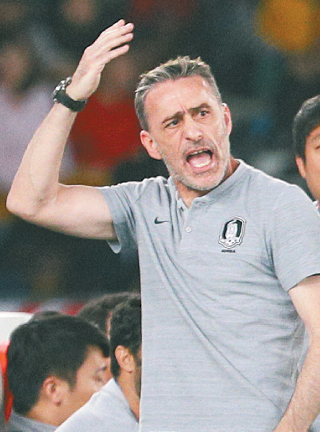 Coach Paulo Bento argues a call during the quarterfinal match against Qatar. [NEWS1]

Bento insisted he will stick to his current playbook, adding Korea still created more scoring chances than its opponents despite its overall offensive inefficiency.

“It’s true that we didn’t score as many goals as our performance warranted,” the coach said. “But I won’t agree with the notion that we didn’t generate our chances. We’re not going to change our style of play.”

After the loss, some Korean players were seen voicing their displeasure with referee Ravshan Irmatov. Bento said officiating didn’t have a bearing on the match’s result and added, “We were eliminated because we couldn’t capitalize on our chances, not because of officiating.”