Hwang Ui-jo looks ahead after loss

Hwang Ui-jo looks ahead after loss 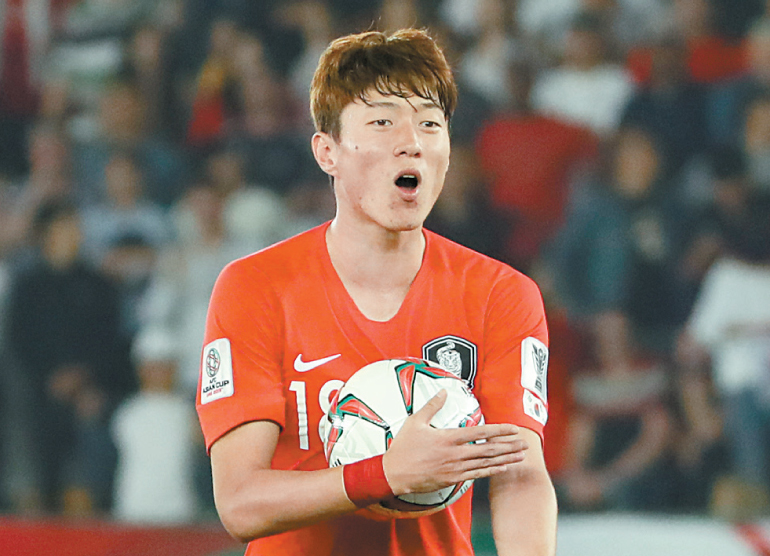 Striker Hwang Ui-jo pleads with officials after his 80th minute goal was ruled offsides by an assistant referee. [YONHAP]

Korea was eliminated from the tournament after suffering a 1-0 loss to Qatar in the quarterfinals. Hwang was Korea’s main target man, but failed to solve Qatar’s stubborn defense at Zayed Sports City Stadium.

“Like the Asian Games, I really wanted to win this tournament,” Hwang said to reporters after the match. “But it’s a pity that we got this result.”

Hwang was the top scorer at the 2018 Asian Games in Indonesia, where Korea took the gold. With his superb performance at the Asian Games, Hwang quickly emerged as the first choice striker for the senior men’s national team coached by Paulo Bento.

The Gamba Osaka forward proved his reputation in the group stage by scoring two goals against the Philippines and China. However, he was silent in the knockout stage.

Against Qatar, Hwang produced Korea’s first shot on target in the 48th minute with his powerful right footed strike.

After conceding a goal to Qatar in the 78th minute, Hwang managed to tap Lee Yong’s cross into the net, but was ruled for offside following a video review.

“Although we didn’t have many, there were still chances to score,” he said. “Qatar played defensively, and our attackers just couldn’t unlock their defense.”

Korea fired 10 shots against Qatar, but only two of them went on target. Hwang said his team should have done a better job on offense.

“We should have penetrated their tight defense with organized movements, but we couldn’t,” he said. “I also should have made more quick runs with precision.”

The 2019 Asian Cup was Hwang’s first major tournament since making his international debut in 2015. The 26-year-old now has six goals in 23 caps.

“The Asian Cup exit doesn’t mean we’re over,” he said. “We will have (2022) FIFA World Cup qualifiers and other matches. The players told one another that they should remember this defeat and work harder in the future.”