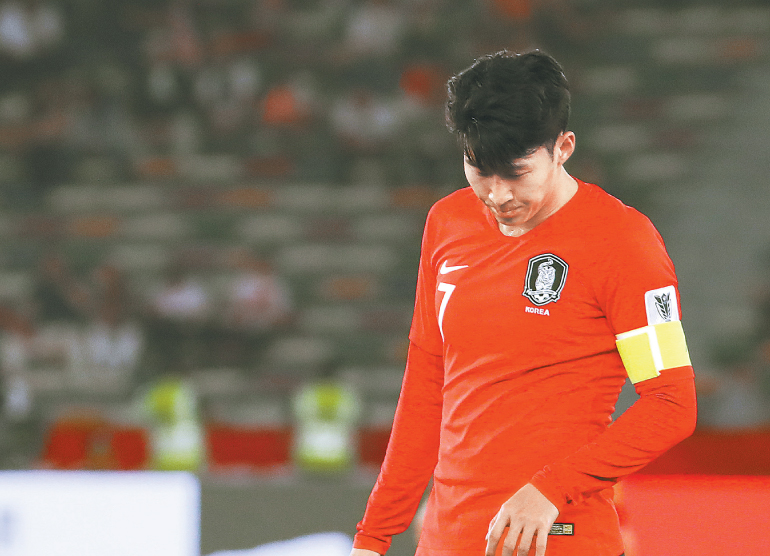 National team captain Son Heung-min failed to find his rhythm throughout his appearance at the Asian Cup.[YONHAP]

ABU DHABI - Son Heung-min was supposed to be Korea’s savior, but the usually reliable attacking ace couldn’t come to the rescue Friday, as Korea bowed out of the quarterfinals at the Asian Football Confederation (AFC) Asian Cup.

Following his team’s 1-0 loss to Qatar in Abu Dhabi, the United Arab Emirates (UAE), Son admitted to running on fumes.

“I wasn’t properly prepared. I was physically drained,” Son told reporters at Zayed Sports City Stadium. “I am sorry that I disappointed my teammates, coaches and fans with this performance.”

Son joined Korea after the national team had played two group matches. It was part of an agreement between Son’s Tottenham Hotspur and the Korean national team, whereby the Spurs made Son available for the Asian Games last summer in exchange for holding him back for the early portion of this tournament.

Korea managed just one goal apiece against the Philippines and then Kyrgyzstan. And Son, the national team captain, was expected to provide an immediate boost, and the versatile attacker, a contender for the Premier League’s Player of the Month for December, made some positive impact in Korea’s 2-0 win against China. But in the ensuing two matches - a 2-1 win over Bahrain Tuesday in the round of 16 and then Friday’s loss to Qatar - Son was well off his game.

But Son, who arrived in the UAE Jan. 14 and played the full 90 minutes against China two days later, hit a wall. He had already played a heavy schedule with the Spurs, and all that action and traveling had taken a toll on the 26-year-old.

“I’d rather not talk about this, but [in the buildup to the tournament,] I rarely felt great physically,” he said. “I was losing sleep. I should have taken better care of myself.”

Korea had five days off between their final group match and the first knockout game. In the round of 16, Korea was dragged into extra time against underdogs Bahrain, and Son played the entire 120 minutes.

Three days later, it was more full-time action for Son, who ended the tournament without a goal.

“I thought I would start to feel better [after the China match,] but it didn’t happen,” Son said. “I know a lot of people expected big things out of our team. I was so mad at myself for not being able to play well. I think we ended up getting this result because of my play.”

Son said the Korean players should look at themselves in the mirror after the earlier-than-expected exit from the tournament.

“I think the future of the national team will change depending on how we deal with this result,” he said. “We have to keep in mind that there are no teams in Asia that we can take lightly, and we’ll have to try to keep improving ourselves.”