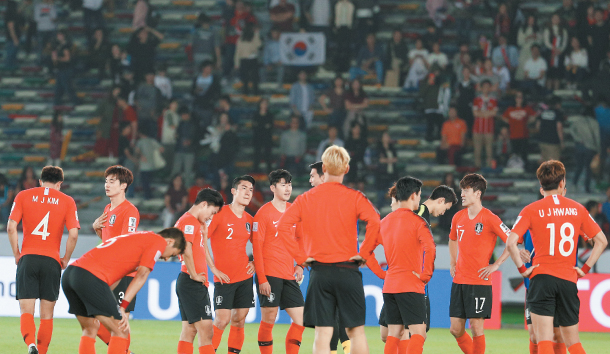 The national team reacts to their 1-0 loss to Qatar during the quarterfinals of the Asian Football Confederation (AFC) Asian Cup Friday evening. Despite being ranked 40 spots above No. 53 Qatar in the world rankings, and dominating possession in the match, Korea failed to put the ball in the back of the net. [NEWS1]

Korea’s continental title drought continued after they were eliminated in the quarterfinals at the 2019 Asian Football Confederation (AFC) Asian Cup Friday after the national team suffered a shocking 1-0 loss to Qatar at Zayed Sports City Stadium in Abu Dhabi, the United Arab Emirates (UAE).

South Korea was looking to end their 59-year continental title drought this year. The Taeguk Warriors won the first two editions of the Asian Cup, in 1956 and 1960, but they have not lifted the trophy since. Since 1960, Korea has been runner-up four times and has had four third-place finishes.

Some fans have blamed “the curse of the fake gold medals.” After the 1960 Asian Cup victory, the national team players received gold medals from the Korea Football Association (KFA) that turned out to be lead plated with gold.

It wasn’t until 2014 that the KFA decided to present new gold medals to the players from the 1960 Asian Cup squad, though most of them had already died.

But it appears that the curse still lives on.

The latest Asian Cup result is somewhat embarrassing for Korea, because it was their first elimination in the quarterfinals since 2004.

Korea entered the 17th edition of the Asian Cup as one of the top title contenders with new head coach Paulo Bento, who took the helm in August.

Under Bento’s reign, Korea remained undefeated through 11 matches. However, their latest defeat under Bento turned out to be the fatal one.

For this year’s tournament, Korea was paired with the Philippines, Kyrgyzstan and China in Group C. Although it had a slow start, the team finished atop the group with three straight wins.

Under an agreement between the KFA and Tottenham Hotspur, Korea was unable to use its attacking ace Son Heung-min for its first two matches against the Philippines and Kyrgyzstan. But Son’s absence was not a major problem for Korea as it went on to beat both the Philippines and Kyrgyzstan 1-0. A lack of precision and sloppy passes in the attacking third left something to be desired, but Korea was still off to a winning start.

Korea had to vie for the top spot in Group C against China in their final group stage match. Although there were concerns against Marcello Lippi’s China, Korea easily blanked the East Asian neighbors 2-0 with Son making his first appearance in the competition.

Although Korea ended the group stage with a perfect result, there were some losses.

Korea had to sit out midfielders Ki Sung-yueng and Lee Jae-sung due to injuries they sustained in the opening match against the Philippines on Jan. 7.

In particular, Ki’s hamstring injury turned out to be worse than expected, which forced Korea to drop the midfield orchestrator from the squad mid-tournament. Ki, Korea’s most experienced player at 110 caps, was allowed to return to his English Premier League club Newcastle United last Sunday, just two days before the round of 16 match against Bahrain.

Despite these injuries, Korea’s winning run continued in the knockout stage.

In the round of 16, Korea beat Bahrain 2-1 in extra time, thanks to the winning goal by Kim Jin-su.

Next up was Qatar, who was enjoying a perfect run with tournament-leading 11 goals and four-game clean sheet streak. Bento’s team prepared for Qatar’s counterattacks by fielding two defensive midfielders, but couldn’t stop the opponents’ powerful middle-range strike in the 78th minute.

Korea’s style of play in the 2019 Asian Cup was highlighted by having more possession of the ball, but the lack of precision and pace in its buildup process and transition offense prevented the team from scoring lots of goals.

With the Asian Cup journey having come to an end, Bento’s team will now have to shift its eyes with concerns to prepare for the 2022 FIFA World Cup. The Portuguese head coach is contracted with South Korea until 2022, should Korea qualify for the top football event.

The national team’s goal for the World Cup has been reaching the round of 16, and with lessons learned from the Asian Cup, Bento will try to achieve that goal in the next three years.