NCT brings their many iterations to the stage: The multi-part boy band kicked off 2019 with series of concerts

NCT brings their many iterations to the stage: The multi-part boy band kicked off 2019 with series of concerts 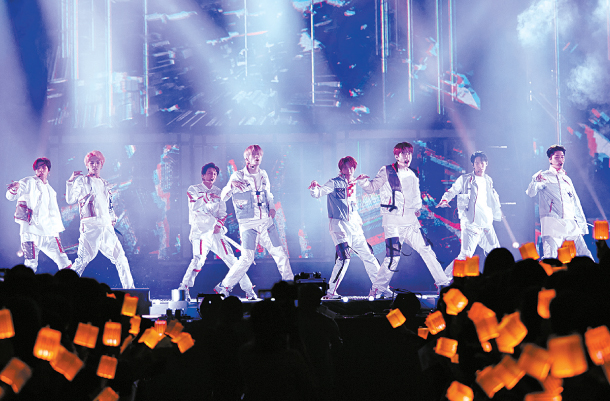 Boy band NCT 127 performs during their concert on Sunday at the KSPO Dome in Olympic Park, eastern Seoul. The members met with the local press before the concert, revealing their thoughts on their first ever solo show. [SM ENTERTAINMENT]

Boy band NCT 127 successfully finished off their first ever solo concert series over the weekend, signaling an exciting start to a new year for the 10-member act. Their concert series “NEO CITY: SEOUL - The Origin” was held at KSPO Dome in Olympic Park, eastern Seoul, where the group performed for some 24,000 fans over the course of the two-day festivity.

“We’re so pleased to have been given such a wonderful opportunity [to put on our first solo concert], and we thank everyone and especially the fans who made everything possible. We’ve been dreaming of this day since our first day of training,” said Taeyong, the band’s leader.

There’s no group quite like NCT in Korean entertainment. As a whole, there are 18 members to the whole NCT brand in 2018: Taeil, Johnny, Taeyong, Yuta, Kun, Doyoung, Ten, Jaehyun, Win Win, Jungwoo, Lucas, Mark, Renjun, Zeno, Haechan, Jaemin, Chenle and Jisung. NCT itself is made up of subunits, including NCT 127, NCT Dream and NCT U. NCT 127’s members are Johnny, Mark, Yuta, Taeyong, Jaehyun, Taeil, Jungwoo, Doyoung, Win Win and Haechan

The group is also unique in that each subunit is subject to “infinite expansion,” meaning it’s ready to add any number of new members to the NCT family and make a new group to add to the list of the subunits. It’s a little confusing for those who are not particularly familiar with the group, to hear three different names for a single group where the members sometimes even overlap. But according to Doyoung, it’s easier to understand when people think of them as a school.

“You have the older students in a school, and young students. Then you have school clubs where students from different grades come together to enjoy their hobbies together. It’s just like that. NCT 127 are the older students, and NCT Dream has the younger students. NCT U is like a school club. And as the oldest, we will be putting on a performance you’ve never seen before,” said member Doyoung.

Member Win Win was unable to attend the press meeting due to scheduled events in China, as well as member Haechan, who suffered an ankle injury in December.

“We do feel that it’s a pity Haechan won’t be taking part in all the performances with us because of his injury, but he will be joining us with his amazing vocal skills on our ballad performances [today],” said leader Taeyong.

The group prepared a stunning visual performance for the fans who made it out to the show, including a part of the show where the group dances on a jungle gym resembling something closer to acrobatics than a pop group’s performance. “We’ve really prepared so much for today, and we hope the audience can have fun with us too,” said Jaehyun.

At the group’s first-ever concert on Saturday, the members of NCT thanked the group’s fan club - NCT Zen - for their love and support. “It was so touching to see the sea of green lights, and we are very thankful for it,” said Johnny.

Other singers from SM Entertainment attended Saturday’s concert to show their support of their fellow stars who are relatively new to the K-pop scene.

The stars who attended Saturday included U-Know from TVXQ, Xiumin from Exo and members of Red Velvet.

“I was so nervous before the concert began, but seeing U-Know made me feel more comfortable,” said Mark. “He even gave us good feedback after everything was over, and that made me feel even better. I was so grateful for such kind support.”

NCT 127 has, interestingly, enjoyed more popularity abroad than have in Korea. They have even performed on the U.S. talk show “Jimmy Kimmel Live!” in October, and took part in U.S. television network ABC’s “Mickey’s 90th Spectacular” in November.

When asked to define what kind of music the group is best at, Doyoung answered, “When you look at the tracks that we’ve released, there’s really no song that’s like the other. We go from hip-hop and R&B to ballad, and so we think that our music goes beyond genres. We’re about challenging ourselves. We don’t confine ourselves to one particular concept.”

Sunday’s concert included all the music that the members have proudly and confidently released since their debut, beginning with “Cherry Bomb,” followed by “Come Back,” “Limitless” and “Chain.” The concert included other hit songs, such as their debut song “Fire Truck,” “Regular” and “Simon Says.” Special performances by each members were also well received by fans, such as a piano performance by Johnny and a dance-off between Yuta and Jungwoo.

The group will soon embark on a Japanese tour entitled “NEO CITY: JAPAN - The Origin” in February, traveling to seven cities, including Osaka and Tokyo.