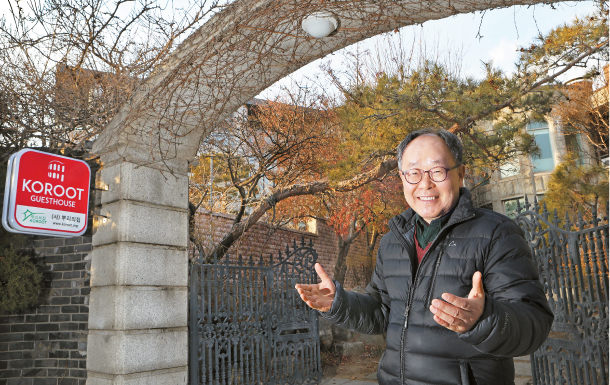 KoRoot President Rev. Kim Do-hyun has managed KoRoot since 2004. Apart from offering accommodations to Korean adoptees who come to Korea, KoRoot also participates in activities to support the rights of adoptees and conducts research for the improvement of social systems involving children and single mothers. [PARK SANG-MOON]

At the corner of a hectic street in Jongno, central Seoul, there is a snug three-storied building that offers a home to people in search of their roots in Korea. Though not big, the stone building known as KoRoot can easily accommodate up to 14 people and provides beds, food and help to those who have flown in from all around the world to the country of their birth, many for the first time.

Every year, approximately 250 Korean adoptees visit KoRoot and stay at the guest house for about a week, according to KoRoot President Rev. Kim Do-hyun.

Kim, 65, has been managing KoRoot since 2004, one year after it was established. The many guests who have stayed in the building over the years come to Korea with different motives and stories, yet they all share the sincere desire to feel closer to their homeland and its culture, and possibly find their biological parents.

“They come to Korea wondering what kind of a country Korea is and to discover a lost part of themselves,” said Kim. “Coming back to the country and the parents that they believe have abandoned them is not an easy choice to make. There are actually many Korean adoptees that visit neighboring countries like Japan and China, but intentionally skip Korea. To them, Korea is an ominous country that has given them dark memories and made their lives unfortunate. So I think those who come to Korea have partly overcome huge scars embedded in their hearts.”

More than 250,000 Koreans are estimated to have been adopted by families abroad since the end of the Korean War (1950-53), when overseas adoption began taking place in the country.

Kim currently conducts research and participates in a number of activities to protect and improve the rights of adoptees and single mothers with the goal of creating a society where children are not given up on. He also works on books with his team, which include a translation of Jane Jeong Trenka’s “Outsiders Within” (2012), and the production of films like “Resilience” (2009), about a mother who meets the son she put up for adoption after 30 years. Together with his team at KoRoot, which also functions as a non-governmental organization (NGO), he strives to revise laws to solve overseas adoptions matters.

Some of the achievements that KoRoot has accomplished along with the help of organizations such as TRACK, a community for overseas adoptees, include a revision of the Special Adoption Law that went into effect in 2012. 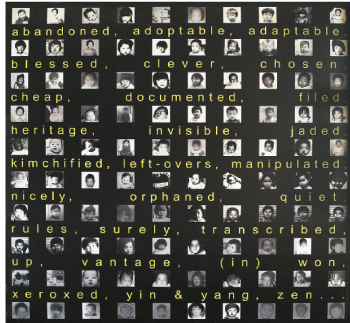 Before the revision, Korean adoptees entered the United States with an IR-4 visa. With this visa, the adoption was not fully complete until the child went through the naturalization process on U.S. soil. After that, they became an American citizen.

“Before [the revision], children were not adopted. Their residence was simply transferred,” said Kim.

But after the revised Special Adoption Law went into effect, the adoptees were sent to the United States with an IR-3 visa, which requires the completion of the full-adoption process in Korea, requiring the adoptive parents to visit Korea. This visa automatically grants adoptees U.S. citizenship when they arrive.

Another achievement KoRoot was able to accomplish with similar organizations was the establishment of Single Parent Family Day. Its first anniversary will be celebrated on May 10. Since 2011, KoRoot has hosted Single Mom’s Day, where attendants discuss ways to improve their rights and create an adequate environment for them to raise a child. This yearly event will celebrate its final year in May.

Working for the rights of adoptees and single parents was not always Kim’s major interest. His passion for these communities began after the suicide of a young Korean adoptee growing up in Switzerland in 1993. At the time, Kim was a pastor at a Korean church there.

From the outside, the girl in her early 20s seemed to have an impeccable life, having grown up in a middle-class family. But the publication of “Adoptiert,” which the girl edited and co-published with several others adoptees, proved otherwise. The book revealed the discrimination she suffered for looking different in a predominantly white society.

The heartbreaking incident moved Kim and inspired him to join KoRoot when he was offered the role. His ability to speak English and German made him the perfect person for the position.

To learn more about KoRoot’s activities, Kim joined Korea JoongAng Daily for an interview in central Seoul last week. The following are edited excerpts from the discussion.

The inside of KoRoot located in Jongno District, central Seoul. From left to right is the building’s parlor, a refrigerator in the kitchen where pictures of visitors are neatly aligned and one of the bedrooms offered to those visiting Korea. [PARK SANG-MOON]

Q. You have seen many adoptees who come to Korea to find their roots. Many of them have had unpleasant experiences growing up and have faced prejudice in their home countries. What are some of the common challenges they encounter during their visit to Korea?

A. Some of the major reasons they visit their mother country is to seek the identity and their biological parents. But they are often seen with biased eyes and given strange looks in Korean society. Finding parents is also very challenging because adoption agencies don’t keep much information on either the mother or the child. Basic documents that prove one’s identity include birth certificates and the family registry, but agencies rarely collect this information in the first place, and even if they do have the information, it is rarely saved. The fact that the agencies are unable to help the adoptees find their parents is proof of their lack of responsibility and mismanagement.

But even when adoptees do find their biological parents, some difficulties are raised, such as language problems. What if the parents, again, hurt the child’s feelings even after the reunion? Have you heard about this?

There are many sad stories related to that. One story that I remember in particular is about a girl named Emily (alias). She stayed at KoRoot around 12 years ago. During her stay, she came to me and told me with tears in her eyes that she had met her biological mother and heard her side of the story. She was told her mother married a man from a family with very traditional values. So she was pressured into giving birth to a son, but kept having baby girls.

After giving birth to Emily - her ninth daughter - a social welfare worker who collected children for overseas adoption approached Emily’s crying mother and offered to swap Emily with the baby boy from the next room whose mother was going to put her son up for adoption. Emily’s mother exchanged the boy for Emily and had been raising him since. When Emily asked whether she could visit the home that she should have been raised in, her mother said no because she feared criticism from her family and the community if they learned that the boy was not her actual son. In a separate case, a father demanded money from his child. There are many different stories.

What is KoRoot currently working on to better society for babies and single parents?

To take it a step further, we also hope to enact change by passing an act that allows mothers to give birth to children anonymously at their discretion. This can only be achieved if the Universal Birth Registration Act is passed. With the government in between the baby and the mother to meditate, private information about the mother giving birth and the right of a child can both be protected.

Apart from that, we also try to help adoptees on more personal level. We host events to celebrate national holidays such as the New Year together, offer translation services and also support DNA tests to help them find their biological parents.

What is KoRoot’s vision? How do you hope to manage KoRoot?

KoRoot hopes to create a society with a more stable child rearing system that is [strictly] developed based on children’s rights. Through this, we wish to create a place where adoption, foster homes and institutional care for young children are less in demand. Ultimately, I want to make a society that does not need KoRoot.