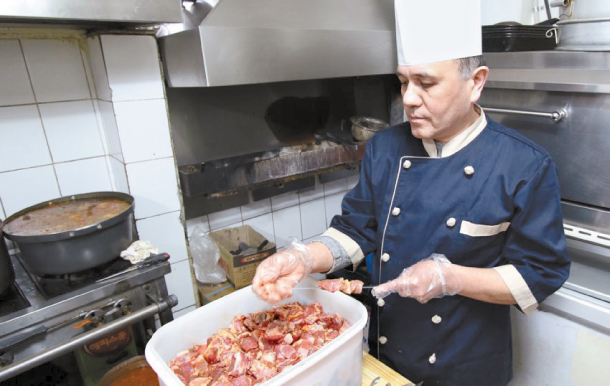 Mirov Isroil is a 56-year-old chef from Uzbekistan who works at a Korean restaurant in front of Dongguk University, central Seoul.

His dream is to work in a cafeteria, like those found in an office or university, because he wants a stable job to develop his Korean cooking.

Isroil trained at a hotel in Uzbekistan and got a Korean cooking license after moving here.

He says he is confident in cooking dishes like sundaeguk, or blood sausage soup, and jeongol, or hot pot.

“I want to work in a cafeteria but the barriers for foreigners are too high, making it difficult to apply,” said the Uzbek chef. “I know I can do better than anyone else, but because I can’t get a job at a cafeteria run by a company, I end up moving from one mom-and-pop restaurant to another.”

Minda Buhhay is a 47-year-old Filipino who lives in Gwangju.

She started a gukbap, or soup served with rice, restaurant with her husband but had to close as she was struggling to make ends meet.

Buhhay recently applied for a job in a corporate cafeteria, which not only provides a fixed income but also guarantees health insurance, regardless of educational background. She was rejected.

“I could not understand the recruiting manager’s explanation that foreign workers are not allowed to work there,” Buhhay said. “Other than working at a restaurant run by individuals, it’s hard to live in Korea as a foreigner.”

Corporate cafeterias are suffering from a shortage of workers. In the case of the large cafeterias found at universities, hospitals and offices, stringent hygiene management and safety prevention is in high demand. The jobs are labor intensive and unpopular with Korean workers.

In the case of large hospitals, where thousands of people use the cafeteria, a single kitchen assistant has to make about 80 people’s meals. Because of a lack of applicants, employees have to work even harder.

The industry says there’s a need to employ foreign workers to supplement the struggling catering departments.

According to the list of businesses permitted to hire foreigners on working visas, only restaurants that serve Korean cuisine, foreign cuisine or other simple food are allowed. Complex operations like cafeterias are not considered to fall into those categories.

“People think that assisting in a corporate cafeteria is tough, so Koreans do not apply,” said Kim Ok-hee, who works in the cafeteria at a major conglomerate that serves more than 1,000 people daily. “A single assistant has to be in charge of as few as 50 to as many as 70 customers a day.”

Ideally, a kitchen worker should not have to serve more than 50 people per day.

“The most important thing when serving meals for such a large number of people is thorough sanitary control and safety precautions,” said Kim. “But since we’re short on hands, the improvement in the service quality is not happening fast enough.

Cafeteria hiring managers tend to end up with short-term workers who cost 150,000 won ($133) a day. Even so, most of them only work for less than six months.

“New workers need to be trained and we cannot wait for them to become acquainted with the work every time,” said a source in the cafeteria business. “Frequent changes in the labor force are increasing the workload for existing workers and aggravating the risk of accidents happening.”

In December, the issue of safety in cafeterias was brought up during a meeting of a food safety policy committee under the Prime Minister’s office.

The percentage of cafeterias among all restaurants and eateries has increased from 27.8 percent in 2010 to 33 percent in 2016, explained Prime Minister Lee Nak-yon during the meeting.

“Today there are 2.26 million children that eat at least one meal a day at day care centers and kindergartens and there are 260,000 seniors citizens having meals at elderly facilities. [However], 45.7 percent of food poisoning [in 2017] happened in those cafeterias. We need to carefully examine every process on how meals are served.”

An official from the Korea Food Industry Association said the only change that needs to be made is to include cafeterias in the list of industries that the government will allow foreigners to be employed in.