[Debriefing] When did whiskey get so weak?

[Debriefing] When did whiskey get so weak? 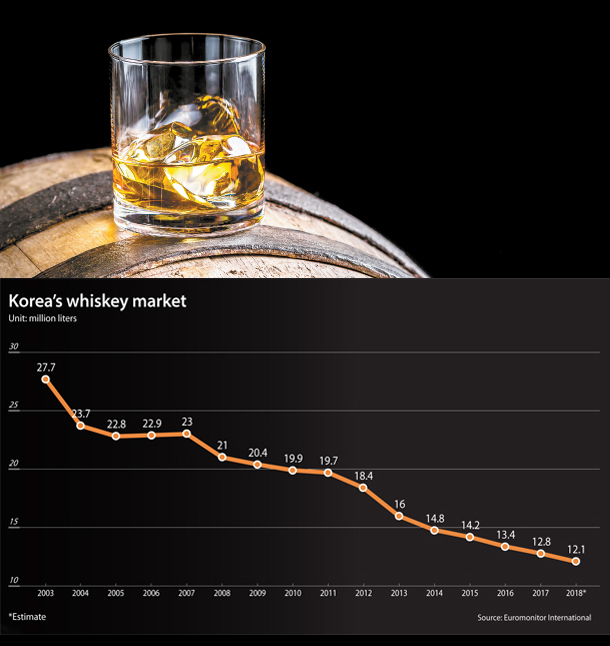 Last week, the Korean unit of French alcohol giant Pernod Ricard announced that it would sell its 24-year-old local whiskey brand, Imperial. It once ranked No. 1 in the local whiskey market and is still the third biggest seller.

The decision came as whiskey’s popularity has been falling in Korea, once the biggest market for Scotch whisky in Asia, for decades. Instead, a weaker whiskey-based drink - known as whiskey-based spirit drinks - has risen in the harder liquor’s place.

So how did Korea fall out of love with whiskey, and exactly what is a whiskey-based spirit drink? 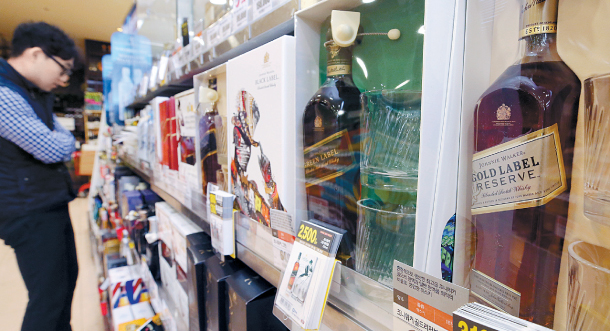 Whiskey displayed at a discount chain in Seoul on Jan. 13. Whiskey sales have been declining in the last decade as local customers look for tastier drinks with less alcohol. [YONHAP]

Q.Korea has long been well known as a whiskey-loving country. How did the drink first gain popularity here?

Whiskey became popular in Korea in the late 1980s when the country’s economy was booming after a decade of government-led growth in the post-war era. It was also around this time that the Korean government loosened tax and regulations for imported alcohol ahead of the 1988 Seoul Olympic Games.

Korea experienced high economic growth into the 1990s, and during this period, whiskey consumption shot up as it became a favorite for unofficial business meetings. The local growth of whiskey goes hand-in-hand with the rise of hostess bars, which played a major role in business relationships and networking at the time.

Other alcohol beverages like wine and vodka were available, but they didn’t have the same luxury, high-priced, hard-to-get image as whiskey. A good bottle of whiskey was a symbol of opulence and was therefore seen as a useful tool in enticing possible clients to do business. Even today, 90 percent of local whiskey sales come from business bars.

Q. When did whiskey’s popularity reach its peak in Korea?

Whiskey consumption continued to grow into the late 2000s. Sales took a short downturn after the International Monetary Fund (IMF) crisis in 1997, but recovery came fast thanks to the IT boom in the early 2000s. Many industry sources remembered 2008 as whiskey’s last big peak - that is, until the financial crisis hit the country. More than 21 million liters of whiskey were sold that year. Sales started to fall with the financial crisis and have never truly recovered.

Amid a difficult economy, local companies had to cut down on budgets. The amount of money allowed to be used on corporate credit cards was one of the first things to be cut back, and this immediately dealt a blow to the sort of late-night business meetings that used to involve plying each other with whiskey - in Korea, these sorts of gatherings were generally covered by corporate expenses.

The introduction in 2004 of stricter regulations on prostitution also affected the hostess bar business, as did a government limit on spending on entertaining guests and clients. The social perception of those late-night gatherings also shifted, taking another bite out of whiskey’s sales.

Q. But sales have recently been declining. What happened?

More recently, the introduction in 2016 of an antigraft law, known as the Kim Young-ran Law, was the final nail in the coffin of the business bar industry. The regulation put a ceiling on meals, gifts and cash exchanged with public officials, lawmakers, journalists and teachers with the aim of eradicating the practice of sending gifts in return for favors.

In practice, the exchange of gifts and meals reduced dramatically even outside of those professions due to a lack of understanding of the regulations and fear of inadvertently being implicated.

Just 12.1 million liters of whiskey were estimated to have been sold in Korea last year, according to Euromonitor International. This is nearly half the amount compared to its golden age just a decade ago.

After the financial crisis, Korea’s economy remained sluggish, making it harder for customers to buy whiskey. Things were changing socially as well - younger Korean consumers have a preference for weaker drinks, leaving whiskey out in the cold.

Simply put, it’s sort of similar to whiskey but has a lower alcohol content. These drinks cannot be referred to as whiskey for marketing and sales activities because they lack certain criteria as defined by the Scotch Whisky Association (SWA), a trade organization that represents the Scotch whisky industry.

Diageo and Pernod Ricard - major manufacturers of whiskey-based spirit drinks - are members of the SWA, meaning they are obliged to follow industry rules stipulated by the association.

Proper labeling of whiskey is a major mission of the SWA - its main purpose is to maintain the reputation and heritage of Scotch whisky. According to its definition, Scotch whisky does not contain additives or flavorings other than caramel, the main ingredient behind its golden color, and is at least 40 percent ABV.

Any product that does not fulfill this set of standards cannot be sold or marketed as whiskey. Whiskey-based spirit drinks in Korea lack the two conditions mentioned above: They all have an alcohol content below 40 percent and often contain additives to infuse a fruity flavor to cater to younger consumers.

Q. What’s behind the rise in the popularity of these drinks?

The shift goes in hand with the changing drinking culture. Decades ago, drinking was an important activity for socializing and people regularly got very drunk, nearly always in groups. This culture, often considered an unspoken obligation for office workers, didn’t click with a younger generation that values their own time and space.

Younger drinkers have instead turned to less-alcoholic options and often enjoy drinking on their own. Even if they do drink in groups, younger generations have a tendency to stick with close friends and avoid drinking so much that they’re crippled by a hangover the next morning.

“A preference for low-alcohol drinks is widespread across all alcoholic beverages in Korea - this is because millennials value a balanced lifestyle and look for change from the past work culture of drinking heavily until late at night,” said Lee O-ryoon, a researcher for drinks and alcohol at Euromonitor International.

Now that customers have a larger range of tipples to choose from, the preference for cheaper, tastier options is increasing, as seen in the trend for imported beer and soju-based flavored drinks. For a lot of younger drinkers, whiskey’s bitterness and strong taste are less accessible, adding to the perception that it is a relic of times gone by.

As of last October, spirit drinks now make up more than 50 percent of the whiskey product market in Korea.

Q. Are they unique to Korea?

They may not be unique to Korea, but experts say that the popularity of whiskey-based spirit drinks in other countries is nowhere near that of Korea.

Euromonitor’s Lee said that whiskey-based spirit drinks are a relatively unknown concept in Europe, where whiskey only refers to products with more than 40 percent ABV.

“There were attempts in Europe, too, where major companies once pushed to release whiskey with additional flavor, but they met opposition from the whiskey association as it goes against the tradition of Scotch whisky,” said Lee.

CEO Yoo Yong-seok of Whisky Live, a company that runs whiskey tasting events, also said that Korea is the only country in the world in which whiskey-based spirit drinks are widespread among the public and take up a meaningful portion of the market.

“Outside Korea, the trend is to mix whiskey with other beverages to make it lighter rather than release a whiskey product that has low alcohol in the first place,” he said.

In the last two to three years, single malt whiskey has actually been making a slow comeback in Korea. Single malt refers to whiskey that is made with 100 percent barley. It comes with a much higher price tag compared to blended whiskey, which is made with a mix of barley whiskey and grain whiskey.

Its popularity is driven by whiskey bars that offer single malts in glasses rather than bottles. The industry estimate is that there are more than 300 single malt whiskey bars in the country - in 2010 there were only around 10.

Single malt bars first started to crop up in Gangnam District, southern Seoul, and Itaewon-dong, central Seoul, but now the trend has reached other parts of Seoul including nearby universities. Successful stores in Seoul have also set up branches in cities like Busan and Jeju Island as well.

What this means is that Korea’s keenest whiskey enthusiasts still have options. They may turn their nose up at whiskey-based spirit drinks, but they don’t have to drink them.

“We live in a time where people value personal preference,” said Yoo. “Drinking is no longer about getting drunk, but caters to a cultural urge to satisfy taste. In whiskey, single malts are doing that.”