Industries lag, and China is seen as main reason

Industries lag, and China is seen as main reason

Korea’s manufacturing sector, once the economy’s growth engine, has been in a rut.

According to a study by a team at Sogang University’s Center for Research and Innovation, industries suffered sharp declines in value added, employment, labor productivity and exports from 2012 to 2017.

While the value-added growth rate for top industries rose by 6.2 percent annually from 2007 to 2012, the figure went negative, to -0.3 percent, from 2012 to 2017. The decline implies that despite the adding of capital and labor, profit decreased.

Other industries did better.

Value added for them did drop from 3.9 percent to 2.5 percent over the same period, so the situation is not nearly as dire.

Over the past five years, value added in the mobile phone industry declined by 15.3 percent, autos 3.9 percent and displays 1.3 percent. The semiconductor industry was the only sector that experienced a rise of more than 5 percent during the period, up 11.9 percent. With weak earnings reported by Samsung Electronics last quarter, the sector also seems to be heading toward a slump.

The negative growth of value added at major industries is largely due to failures in development in industry structures. In the case of smartphones, local manufacturers have an edge over foreign competitors - such as Apple and Huawei - in low added-value categories such as simple assembly. However, in categories that require advanced technology in terms of the operating systems (OS), app stores and application processors, local companies struggle to compete.

Samsung Electronics produced a smartphone with its own Tizen OS back in 2015. However, it stopped development of the OS last year, opting to use Google’s Android OS.

The auto industry faces a similar situation. Hyundai Motor is a leader in assembling vehicles, but it is still behind in terms of development in future sectors, such as self-driving technology and artificial intelligence, compared to its competitors in Japan and Germany.

Local automaker development in such technologies is currently at 70 percent of its international competition.

The shipbuilding industry struggles to catch up to companies from Norway, which won orders for unmanned electric ships last year. The local industry hasn’t even entered the new market.

Labor productivity is also another area of concern. While the growth rate for the category was at 3.1 percent from 2007 to 2012, it fell to -0.9 percent from 2012 to 2017, meaning that an extra worker leads to less economic value for companies. The trend is most apparent in mobile phones, which experienced a 10.2 percent decline, autos down 6.4 percent and shipbuilding down 5.2 percent.

The lack of corporate investment and the declining employment numbers, as seen in recent job numbers, can be attributed to the fall in the growth rates for value added and labor productivity. Despite the input of more capital and labor, profit is declining. 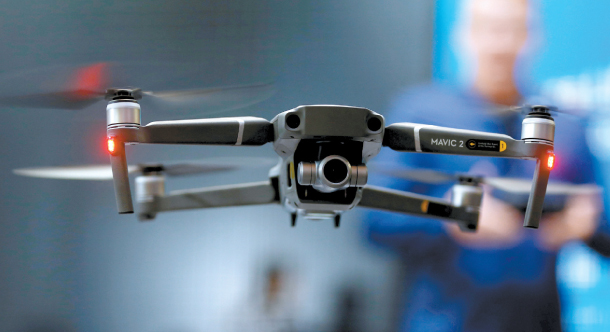 China-made Mavic 2 drone, from DJI, can film thermal images and has a high-zoom camera. [REUTERS/YONHAP]

The research team at Sogang University said the main reasons behind the faster rate in declines for major industries are the decline in overseas demand after the 2008 financial crisis and market encroachment by China and its fast-developing companies.

“Smart technology, which can increase value added for manufacturing, cannot be earned in a short period of time,” explained Heo Jung, one of the research team’s head. “If we fall behind in the latest technology, we could fall into the footsteps of other countries that experienced an unexpected collapse in major industries.”

The situation for the country’s largest companies is becoming increasingly difficult.

The Samsung Electronics earnings “shock” in the fourth quarter last year was seen coming years ago.

In September 2015, Standard & Poor’s warned in a seminar that Korean companies face competition from all sides. The credit-rating agency said smartphones from Samsung Electronics will lose out to Apple in the premium tier, while facing competition from Chinese companies in mid- to low-tier phones.

Stock market circles predict that the Samsung Electronics mobile division will post an operating profit of 1.7 to 1.9 trillion won ($1.5 billion to $1.7 billion) in the final quarter last year. This would be the first time since 2015, during the Galaxy Note 7 fire recall, that quarterly operating profit predictions for the company are below 2 trillion won.

Sandwiched between premium products from other advanced economies and low-tier products from China, Korean products are being squeezed from both sides. With China’s rapid development over the past few years, Chinese companies have become a real threat to Korean industries.

The situation can be seen in numerous figures.

According to a study by the Korea Evaluation Institute of Industrial Technology, China has greatly decreased the technological gap with Korea in 13 advanced industries, such as smart electronics and system semiconductors.

Despite the slight edge Korea has over China in technology, it falls behind in industry competitiveness.

According to the Competitiveness Industrial Performance Index released by the United Nations Industrial Development Organization, Korea maintained fourth place since 2009, after Germany, Japan and the United States. However, since 2015, Korea started to fall behind China.

Deloitte’s Global Manufacturing Competitiveness Index, released every three years, also shows that Korea fell from third place in 2010 to fifth after 2013. China has scored a full 100 points since 2010.

The lack of competitiveness in Korean industries is widespread, especially in the local steel industry.

The petrochemical sector is threatened as well as China starts to use its own products over those from Korea.

While Korean companies hold a technological advantage, with LG Group showcasing foldable OLED TVs in the 2019 Consumer Electronics Show, it has lost competitive edge as Chinese display companies have gained ground in liquid-crystal display (LCD) technology, one of the traditional strongholds of Korean companies. According to the Korea International Trade Association, Korea’s LCD exports amounted to $32.3 billion in 2010. That has since decreased to $18.2 billion in 2017.

In other emerging sectors, such as electric vehicles, mid- to small-sized ships, solar panels and drones, China has surpassed Korea. In the smart-vehicle sector, such as self-driving technology, China is just behind Korea, lagging by 0.9 years, as of 2017. 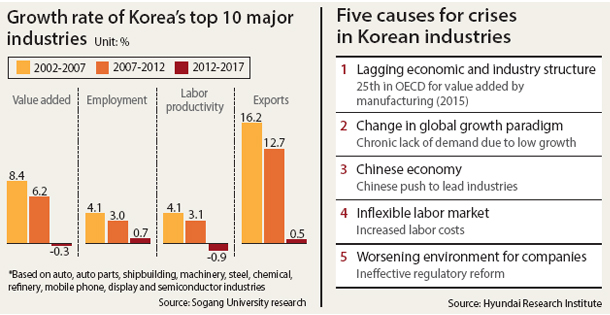 The situation appears difficult. Amid aggressive pursuit by China, Korea’s high-tech competitiveness is on shaky ground.

The Moon Jae-in administration recently announced a push to support hydrogen energy-based industries, outlining plans to raise the sale of hydrogen fuel-cell electric vehicles to 810,000 units in total by 2022 and create 420,000 related jobs by 2040.

The situation is similar for most promising future industries such as self-driving cars, as foreign companies have the competitive edge in high-end components like artificial intelligence camera sensors, lidars and IT platforms.

The research team at Sogang University warned that if local major industries are unable to raise their value added, the collapse of local industries will come at a faster rate.

For the auto industry, a report from the Export-Import Bank of Korea said due to the decrease in the number of components used - as the transition is made to electric vehicles from internal-combustion engines - production costs will decrease by 46 trillion won and 260,000 jobs will be lost.

“It is impossible to create new growth engines without solving the crisis in major industries,” said Joo Won, chief of the economic research department at Hyundai Research Institute. “There needs to be a new ‘China strategy.’”