With 200 Watts, Samsung’s Jet should suck harder than its rivals

With 200 Watts, Samsung’s Jet should suck harder than its rivals 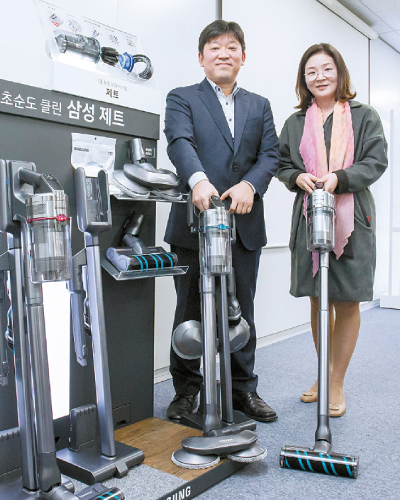 The company released the Power Gun brand in 2017 but failed to gain ground in a market dominated by LG Electronics and Dyson, estimated to take up around 40 percent of the cordless vacuum market each. Samsung has had other cordless vacuum cleaners before, but the Power Gun was the first series to have a motor on the top handle, the dominant style among premium models started by U.K.-based Dyson.

Samsung Jet’s first product, the Powerstick Jet200, boasts 200 watts of suction power, the highest among its competitors. LG and Dyson promote their recent products as having suction power of 140 and 160 watts each. Samsung installed an upgraded motor that can run at double the speed of its previous range.

Samsung also focused on combatting fine dust with the new product, a major concern for local customers today. The Samsung Jet comes with five filters that suck up particles of different sizes and make sure they remain inside the machine instead of leaking out again. The filters can all be disassembled for cleaning purposes instead of being stacked up as one component.

To suit the wooden floors found in most Korean apartments, Samsung offers two mop attachments. One looks like a round towel that can be wet before use - the vacuum does not come with a water tank. The other attachment allows users to attach disposable wipes.

Samsung Jet’s battery lasts for a maximum of 60 minutes once fully charged - 1.5 times longer than previous models - has a handle 30 percent lighter and makes a similar amount of noise to the Power Gun despite having much more sucking power. It comes with a slightly higher price tag than the Power Gun, at up to 1.4 million won ($1,250).

Eugene Chung, a senior director at Samsung’s home electronics division, said that the company will not ditch its Power Gun brand, explaining that Samsung Jet will be a slightly more premium lineup catering to a different group of customers.

“The Jet has a lot of new technology we developed [after Power Gun] so it comes with a new name and an upgraded positioning strategy,” she said in a press event held Monday in central Seoul. “Our internal goal this year is to expand sales by 50 percent year on year.”

As of last year’s third quarter, cordless vacuum cleaners accounted for around 56 percent of the vacuum market, according to market research firm Gfk.

The Samsung Jet will go on sale in Korea on Feb. 7.