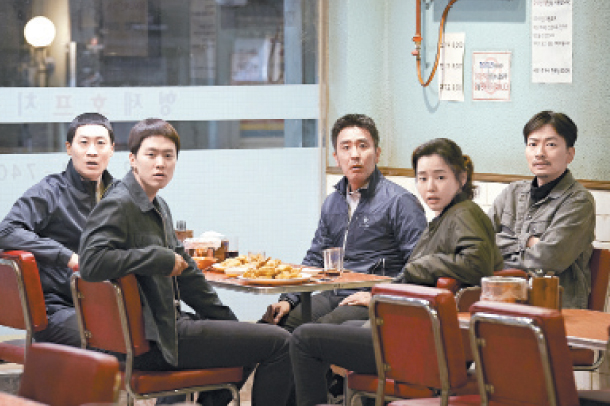 Local releases dominated the top of the domestic box office over the weekend, led by the comedy “Extreme Job.”

From Friday to Sunday, “Extreme Job” sold 2.4 million tickets at 1,977 screens. According to data provided by the Korean Film Council on Monday, the film’s ticket sales accounted for an impressive 77.1 percent of the entire weekend ticket sales revenue.

Directed by Lee Byeong-heon, known for comedies like “What A Man Wants” (2018), the film tells the story of a low-performing police drug squad that attempts to take down a criminal organization.

To do so, they open a chicken restaurant that does unexpectedly well, interfering with their work. The five-person team includes Chief Detective Go (Ryu), the hot-tempered Detective Jang (Lee Ha-nee) and rookie officer Jae-hun (Gong Myoung).

Since the movie’s release on Wednesday, the title has sold a total of 3.1 million admissions.

Coming in at a distant second was “Mal_Mo_E: The Secret Mission,” which topped the weekend box office during the first two weeks of its release.

The period film, set during Japan’s colonial rule over Korea (1910-45), sold 188,000 tickets at 826 screens from Friday to Sunday, accounting for just 5.8 percent of the weekend’s ticket sales revenue. The total ticket sales of this movie, about a group of people who try to publish hangul (Korean alphabet) dictionary against pressure from the Japanese military, now stands at 2.7 million in its third weekend.

Coming in at fourth was comedy title “Inside Me,” which slid two spots from last weekend.

Starring actor Jinyoung, the movie about a bullied and shy high school boy (Jinyoung) swapping bodies with a middle-aged gang member (Park Sung-woong), sold 88,000 tickets. Since its release on Jan. 9, it has sold a total of 1.88 million tickets as of Sunday. 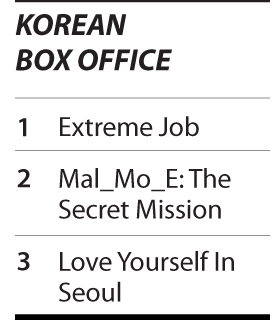 Rounding out the top five was “Ralph Breaks the Internet.” Disney’s humorous sequel to “Wreck-It-Ralph” (2012) sold 70,000 tickets over the weekend, with its accumulated ticket sales standing at 1.7 million since its release on Jan. 3.

With the Lunar New Year holiday approaching, a number of titles are expected to draw audiences to theaters over the weekend, leaving many wondering whether “Extreme Job” will be able to hold onto the top spot for a second week.