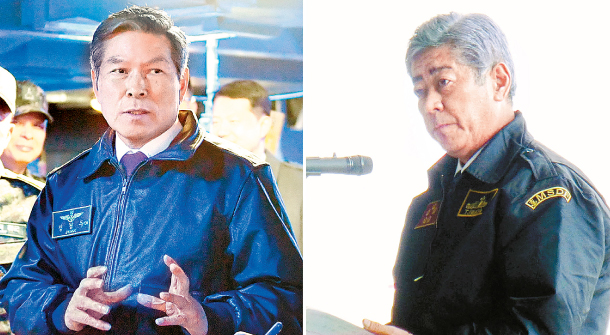 A series of spats between Korea and Japan are dampening military exchanges between the two countries, straining their long-standing strategic partnership in the region.

Tokyo’s Defense Ministry is reportedly revisiting its plans to deploy its Izumo-class helicopter destroyer - the ship Tokyo recently announced would be converted into its first aircraft carrier since World War II - and a number of other military vessels to international maritime security exercises scheduled to be held in Busan in April.

On Saturday, Japanese Defense Minister Takeshi Iwaya said that “maintaining defense cooperation with South Korea is important,” but added that he would review whether participating in the April drills would be the “most appropriate” means of promoting cooperation.

The scheduled naval exercises are organized by the Association of Southeast Asian Nations (Asean) Defense Ministers’ Meeting-Plus (ADMM-Plus) and are tentatively scheduled to kick off near the coast of Busan and move down to Singapore in April.

As joint co-chair of the maritime security panel at the ADMM-Plus along with Singapore, Korea planned to host drills involving naval vessels from Japan, the United States, Singapore, Australia and Canada. The exercises are meant to promote multinational cooperation in fields like combating maritime piracy, rescue operations and defending oil platforms from threats in the first major operation of its kind.

According to a Korean government source, the United States was particularly keen on a successful outcome for the joint exercises. It hoped that the operation would alleviate much of the tension between Seoul and Tokyo over a Korean warship allegedly locking its fire control radar on a Japanese patrol aircraft and recent flybys by Japanese planes of Korean naval vessels.

Throughout late December and January, the two countries had been waging an acrimonious public dispute over these issues. This has caused doubts among defense officials on both sides about the validity of their strategic partnership despite mutual concern over North Korea and China.

According to Seoul’s Defense Ministry and Navy, the commander of the Korean Navy First Fleet effectively canceled his visit to the Japanese Maritime Self-Defense Force’s headquarters in Maizuru harbor next month. The visit was scheduled as part of a long-standing ceremony between the two countries’ navies.

Naval commanders in Korea and Japan visit bases in each other’s countries every year as part of a military partnership between the two countries, and it was Korea’s turn to reciprocate with a visit to a Japanese base this February. A military source in Seoul said First Fleet Rear Admiral Kim Myung-soo would not be making the visit, since the Korean warship involved in the radar dispute - a Gwanggaeto the Great-class destroyer - belongs to the First Fleet.

Defense analysts in Korea also say that it is likely that Seoul will not be renewing the General Security of Military Information Agreement (Gsomia) set to expire late this year.

The pact, which involves sharing classified military information, was first signed with Tokyo in November 2016 with strong backing from the Obama Administration, which pushed for closer ties between its two closest allies in East Asia as part of an effort to contain North Korea’s nuclear program.

While South Korean President Moon Jae-in took an active stance against the pact during his election campaign in 2017, he allowed the agreement to be renewed for another year after he took office in May. Following his historic first summit with North Korean leader Kim Jong-un last year, Moon’s government was pressured to scrap the deal with Tokyo by Pyongyang, which called it a “dangerous hurdle” to the improvement of inter-Korean ties.

Despite concerns voiced by defense analysts in Japan and South Korea that the growing wedge between them could undermine efforts to denuclearize North Korea, political concerns appear to be taking priority in Tokyo. Japanese media continue to fan anti-Korean sentiment surrounding the radar and flyby disputes.

Asahi Shimbun on Saturday quoted one official who went so far as to say that many in Tokyo’s Defense Ministry wish that “the Japanese archipelago can be moved to the waters next to California because of fatigue over Korea.”

A Korean diplomatic source in Tokyo said the fact that such a major newspaper like Asahi is using such provocative language testifies to how testy the two countries’ relationship has become. The tensions were furthered inflamed with Japan’s objections to a Seoul court ruling on a damages suit filed by Korean plaintiffs against Japanese companies that forced them into labor during World War II.

Japanese media’s recent negative portrayal of South Korea appears to be a major political boon for the Shinzo Abe administration. The latest poll jointly commissioned by Tokyo TV and The Nikkei showed its support rose to 53 percent this week, up six points compared to last December.

With local and upper house elections slated for April and July this year, it looks unlikely that the Abe government will let up on its stance towards Seoul for the time being.